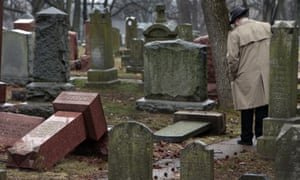 His maddening insistence on Tuesday that really, he denounces antisemitism “whenever I get a chance,” simply isn’t reflected in his actual record.Remember when, during an appearance with the Israeli prime minister last week, Trump was asked if his rhetoric contributed to a rise in antisemitism? He responded, inexplicably, with a self-congratulatory riff on his Electoral College victory. A day later, when a Jewish reporter asked about that very issue, he sniffed that he was: “very insulting.” He then told that reporter to “sit down.” He did – but the rest of us shouldn’t.

Take a look at the guy in the picture. That’s Steve Miller, senior advisor to Donald Trump. He’s also an avowed racist. Don’t take my word for it—that’s what his friends and family say. He hasnR…

The land first – and so beautiful. And it does not war against itself.