Jallad’s father told Haaretz that his son had set out from their home in Tulkarem that morning for the nearby city of Nablus, where he was being treated at the An-Najah National University Hospital.When Jallad realized he had mistakenly boarded a shared taxi heading to Ramallah, rather than Nablus, Levy reported, “The driver suggested that he get off at Huwwara junction, next to the checkpoint of that name, where he would be able to pick up the taxi to Nablus.”Jallad exited the vehicle and began to cross the road.“He did so on the run,” according to Levy. “On the other side was an [Israeli army] jeep and a few soldiers, who were guarding the busy junction. The soldiers apparently thought that he was out to attack them.”Jallad was shot with one bullet to the stomach as he reached the middle of the road, Haaretz recounted. A Palestinian ambulance crew happened to drive by and attempted to evacuate Jallad, but Israeli forces prevented them from doing so.He was eventually evacuated in an Israeli ambulance and taken to a hospital.During the months of hospitalization before his death, Jallad was put under the custody of an Israeli military court. His family were kept in the dark about his condition and were prevented from seeing him.Jallad’s father was denied a permit to enter Israel and though his mother was issued a permit on four occasions, only once was she allowed to enter her son’s hospital room.The family looked up one of his doctors online and called him last Friday. It was only then that Jallad’s family learned that he had died, they told Haaretz. They still have not been informed of the date and cause of his death.

Source: Palestinian was on way to chemotherapy when shot by soldiers | The Electronic Intifada

Trump also invited club members to “come around” for his interviews with potential nominees for Secretary of State, Treasury Secretary and other positions. Beyond that, the next most shocking thing from the tape is that he doesn’t talk about his huge (not at all actually huge) Electoral College victory, a meme/tic he’d pick up later into his presidency.The audio leak comes at a somewhat inopportune time for Trump, as his latest jaunt down to Mar-a-Lago, which as we all know is another private club he owns, coincides with that whole thing where members of the club watched his idiotic staff point unsecured phones at classified documents he looked at while trying to figure out how to respond to a North Korean missile

Friday’s torrential downpour created a 20-foot sinkhole on Woodbridge Street near Laurel Canyon Boulevard shortly after 8:00 p.m that same night. The sinkhole consumed two vehicles – and one of the vehicle’s drivers – but no major injuries were reported.”Firefighters arrived on-scene to find one car upside-down in a large dark sinkhole full of rushing water,” a report of the scene posted on the LAFD website notes. “The single occupant was standing on the upside down car, approximately 10′ below street level.””Firefighters jumped into action and rapidly lowered an (20-foot) extension ladder down to the (48-year-old female) [victim] allowing her to climb out, and transported her to a local hospital in fair condition,” adds Erik Scott of the LAFD, according to City News Wire. “She said she thought she was going to die.Then she heard the firefighters yell back to her. …The pavement continued to give way and the second [unoccupied] vehicle fell in the sinkhole.” 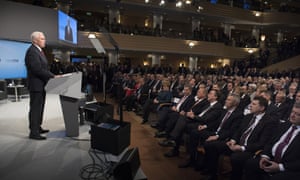 The audience, made up of national leaders, defence and foreign ministers and other senior government figures, who would normally, out of politeness, offer up a warm welcome for a senior US politician, greeted some of his comments with sparse applause.Pence, reiterating that the US remained committed to Nato, attempted to soothe concerns that Trump might deal directly with Putin, bypassing western Europe. The audience welcomed his promise that Russia will be held “accountable” for its actions in Ukraine, although he didn’t spell out how.But he lost them when he went further than US defence secretary James Mattis at Nato headquarters last week in rebuking Nato members such as Germany, France and Italy for failing to pay a fair share of its financial burden.Echoing Trump’s threat last year that he would not necessarily be bound by Nato’s article five, which commits every member to come to the aid of any that comes under attack, Pence reiterated the president’s warning that military help might depend on how much a country under attack had contributed to Nato.

“I was raised in a non-religious family, but certain experiences in life have caused me to connect with something that I can’t explain. Those experiences are like my paintings. The more I try to describe them, the more they lose their meaning.”(Buenos Aires, Argentina)

The most enduring values of liberal democracy are simply those that get schoolchildren through sports day: There is a level playing-field; no one is excluded from playing and everyone gets a fair shot. The rules are transparent, and cannot be changed mid-contest. Afterwards, there are winners and losers, and that’s OK. Compete fiercely to win, but those who don’t succeed need to wish the winners well, and to exit on friendly terms. Winners should behave with good grace, and not bully or display arrogance.Everyone shares these values, whether you’re in Asia or in the West (or perhaps more accurately, those pockets of human society that don’t follow these rules? You find them both in Asia and in the West.)For Asia to lead, it has to have a story. What form that narrative takes remains work in progress: Asia’s intellectuals need still to forge that vision. In some circumstances, networks can usefully replace multilateral agreements. In many situations, a duties-based social understanding can perfectly well substitute for a rights-based one. Openness and transparency work well for social benefit, but only up to a degree. Reverence for learning and scholarship is far from a Western monopoly. And that old fetishism, that for creativity one needs the space to rebel, flies in the face of all manner of disciplined scientific investigation that have lead to profoundly significant discoveries. When Thomas Alva Edison perfected the modern light bulb, he was not wearing cut-off jeans and chewing bubble gum.But certain other things need to be excluded right away from Asia’s narrative. When Trump and those around him display xenophobia, racism, anti-Islamic policies, nationalist populism, and an extreme zero-sum mentality, Asia needs to NOT say, we see no problem with that. When Trump undermines the free press and subverts America’s democratic institutions or America’s judiciary, Asia can NOT say, we are OK with Trump and his people doing those things; we have the same problems here. Asia must NOT say, let’s focus on Trump’s business acumen and deal-making instincts – for that too is what we know best and like most.

Source: How can Asia lead the liberal world order? | DQ-en

Taking from some Acetates I had borrowed from Melanie’s Mom.