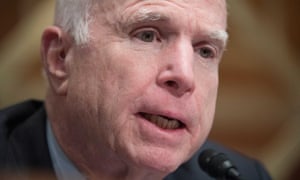 The chairman of the Armed Services Committee, said “more and more of our fellow citizens seem to be flirting with authoritarianism and romanticising it as our moral equivalent”. The senator also regretted the “hardening resentment we see toward immigrants, and refugees, and minority groups, especially Muslims”.European governments have been unsettled by the signals sent by Trump on a range of foreign policy issues ranging from Nato and Russia to Iran, Israel and European integration.The debut trip to Europe of Trump’s defence secretary, Jim Mattis, and his secretary of state, Rex Tillerson, to a meeting of G20 counterparts in Bonn, went some way to assuaging concerns as they both took a more traditional US position. But Trump is wrestling with a growing controversy at home about potential ties between his aides and Russia, which he dismissed on Thursday as a “ruse” and “scam” perpetrated by a hostile news media.

Source: McCain savages Trump administration and inability to ‘separate truth from lies’ | US news | The Guardian

Source: Why is Trump’s adviser wearing a medal of Nazi collaborators? | +972 Magazine

The BBC has admitted to producing a misleading map of Israel in which Jerusalem is included, the occupied West Bank is annexed to Jordan and Gaza no longer exists.The map was produced as a graphic for an episode of BBC Two’s Hairy Bikers cookery series entitled “Chicken and Egg,” broadcast at the end of last year.In the episode, the motorcycling cooks visit Israel and Jerusalem – though the status of the eastern part of the city as occupied territory is not acknowledged – to learn about local chicken and egg dishes. These are all referred to as “Israeli,” even though they include platters which are clearly Arab and North African in origin, including shawarma, shakshuka and couscous.

Talk that during the 1950s would have led to Congressional hearings for un-American activities is today coming, not from Hollywood liberals and intellectuals, but from the President of the United States and his closest advisors.During last year’s presidential campaign, Donald Trump offered glowing praise for Russian President Vladimir Putin’s strong leadership and decisive action in Syria where Russian bombings killed innocent women and children.Trump also said Putin was a stronger leader than President Barack Obama, leading many Washington insiders to question Trump’s seemingly un-American rhetoric.Then came news that hackers had breached the computers of the Democratic Party and Hillary Clinton’s campaign, leading to the release of embarrassing emails that eventually drove a wedge between Clinton and Bernie Sanders supporters.At the time when many suspected Russia was behind the hacking, Trump publicly encouraged Russia to continue hacking and release more emails. Trump doesn’t mind international meddling in our elections as long as it seemed to have been in his favor.Now this week, intelligence officials confirmed that retired General Michael Flynn, Trump’s pick for National Security Advisor, had several contacts with Russia’s Ambassador to the US during the presidential transition. During those conversations, Flynn discussed sanctions against Russia put in place by Obama in his final weeks in office.Flynn had denied having had such conversations, but CIA intercepts revealed he had lied to Trump, Mike Pence, and the nation.And this wasn’t the first Trump advisor with Russian connections. His campaign chairman, Paul Manafort, had various ties with Russian politicians and sympathizers. During the campaign, several others staffers had continued interactions with Russian operatives.Trump himself has had trouble explaining clearly what, if any, business ties he has with Russians. His story has changed from having no relationships to having excellent ones.Last month, a former British spy released a dossier of intelligence reports claiming Russia has information on Trump they could use to blackmail him. The report was unconfirmed, but many intelligence experts suggest the former British spy is a credible source.In the last few days, after General Flynn finally resigned in light of his inconsistent recollection of contacts with the Russians, the White House’s position on Flynn varied.Some reported Trump continued to support Flynn, some said Trump fired him, and other said Flynn resigned.But what didn’t happen was a clear articulation that playing footsies with the Russians is a problem to the Trump Administration.Russia has invaded its neighbors, annexed land, and bolstered a bloody regime in Syria. Putin has poked and prodded US military ships and aircraft around the world. And Russia this week parked a spy ship off the East Coast to watch one of our largest submarine bases.Yet, still, Trump refuses to hold Russia accountable.In the 1950s, Trump and his close advisors would have been on a blacklist by now, hauled before Congressional committees, and asked tough questions.Instead, we’re watching the American President play into Putin’s hand, seemingly pliable like a puppet.Maybe it’s true Trump is being blackmailed, or he’s naive enough to think Putin really likes him. Either way, America is less safe.Trump should stand strong against any country that tries to influence our elections, provoke our military, or hack our infrastructure. Even if they say nice things about Trump and stroke his ego.

Source: Joe McCarthy Must Be Rolling in His Grave | La Prensa San Diego

The protest – organized by local authorities and Mexican advocacy groups and including El Paso Mayor Oscar Leeser – brought together people armed with flowers to the border town of Ciudad Juarez, which is already separated by extensive fencing from its US neighbor city El Paso.Many people on both sides of the border cross it daily, calling one country home while going to work in the other.”Ciudad Juarez and El Paso are one city – we will never be apart,” said Leeser, who was born on the Mexican side of the border.

Vytautas Bakas, chairman of the Lithuanian parliament’s Committee on National Security and Defense, said on Friday that a probe had been launched into the incident amid growing concerns over the spread of so-called “fake news” meant to sow distrust between locals and NATO allies.”The police are conducting [the investigation],” Bakas told DW in a phone interview. Furthermore, he added that Lithuanian authorities had been preparing for such incidents, which he called “information attacks.”

The penguin stolen from a zoo in the southwestern German city of Mannheim was missing its head.

A Department of Homeland Security (DHS) official described the document as a very early draft that was not seriously considered and never brought to General Kelly for approval.However, DHS staffers said on Thursday they had been told by colleagues in two DHS departments that the proposal was still being considered as recently as February 10.DHS spokeswoman Gillian Christensen declined to say who wrote the memo, how long it had been under consideration or when it had been rejected.The pushback from administration officials did little to quell outrage over the draft plan. Two Republican governors spoke out against the proposal and numerous Democratic politicians denounced it as an overly aggressive approach to immigration enforcement.Democrats Senate minority leader Chuck Schumer said he was appalled at the report saying, ” I just hope it’s not true”.Mr Schumer called the concept “despicable” and said even considering the proposal would be “appalling”.”Regardless of the White House’s response, this document is an absolutely accurate description of the disturbing mindset that pervades the Trump administration when it comes to our nation’s immigrants,” said US senator Catherine Cortez Masto.Arkansas Republican Governor Asa Hutchinson said he would have “concerns about the utilisation of National Guard resources for immigration enforcement”, believing such a program “would be too much of a strain on our National Guard personnel”.Utah GOP Governor Gary Herbert would have serious concerns about the constitutional implications and financial impact of activating the National Guard to round up unauthorised immigrants, the governor’s office said in a statement.Senator Richard Blumenthal said: “This administration’s complete disregard for the impact its internal chaos and inability to manage its own message and policy is having on real people’s lives is offensive.”

The message was swiftly deleted, but 16 minutes later Mr. Trump posted a revised version. Restricted to 140 characters, he removed the word “sick,” and added two other television networks — ABC and CBS — to his list of offending organizations.

“This is a matter of concern for everyone. We cannot trust the federal government’s promises.” These words, spoken by lawyer Marielena Hincapié, illustrate the general feeling among legal experts on immigration issues following the recent detention in Seattle of a Mexican man who was protected under Obama’s Deferred Action for Childhood Arrivals (DACA) program.