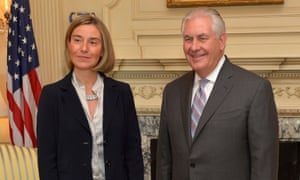 She also took the opportunity to remind the administration, which hosted the UK prime minister, Theresa May, as the president’s first foreign guest, and promised her a favourable trade deal, that Britain did not have the right to negotiate independently until it was outside the EU, which was two years away at least.“The strength of the EU and the unity of the EU I believe is more evident today than it was a few months ago. This has to be clearly understood here,” Mogherini said. “This also means respect for the EU not simply as an institution. It is a union of 28 member states.”Mogherini expressed cautious optimism that Brussels and the new administration in Washington could learn to cooperate on a case-by-case basis.“We believe we are probably entering a time of a more pragmatic and transactional kind of relationship with the United States,” Mogherini said.