It’s important that we all never forget who and what Bannon is.He is the media executive who, in his own words, turned the Breitbart News website into “the platform for the alt-right.” The alt-right is simply a rebranding of white nationalism for the digital age. At an alt-right gathering held shortly after the election just a few blocks from the White House, Richard Spencer – a man who has been lauded by Breitbart as one of the movement’s leading intellectuals – quoted Nazi propaganda and prompted sieg heils from the audience.During his campaign, Trump shared links to Breitbart’s racially charged content with his Twitter followers more often than he linked to any other media outlet. Another outlet that linked to Breitbart more than any other: the neo-Nazi website Daily Stormer, whose proprietor on election night exulted that “[o]ur Glorious Leader has ascended to God Emperor.”Now, Bannon sits at the right hand of the president and wants to silence the legitimate news media. He wants Americans to get their “news” from the website favored by neo-Nazis.We should all be very alarmed. 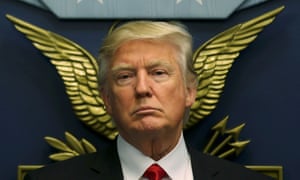 The order is nothing short of a Muslim ban by another name. It is cruel and callous, espouses positions contrary to the professed values of the United States, and will certainly produce more problems than it purports to solve. In other words, it’s exactly like Donald Trump.I cannot tell you how livid these scant pages of bureaucratic language make me. In them, Trump is returning the country to the dark days of excluding masses of people on the basis of our national prejudices. It’s as if we’ve reverted to the late 19th century when laws were passed to bar Chinese entry to the United States, but this time the action is by executive fiat and trained on Muslims. Not incidentally, the case law for Chinese Exclusion also established the legal authority for the National Security Entry-Exist Registration System (Nseers), the US government’s previous incarnation of a Muslim registry. We’re never far away from our demons.

As President Trump signs executive orders on International Holocaust Remembrance Day, suspending refugee admissions for 120 days, indefinitely blocking all Syrian refugees, blocking entry to the US from seven countries, and limiting the amount of refugees, the White House statement from earlier in the day rings hollow. The statement reads, “it is impossible to fully fathom the depravity and horror” of the Nazi regime and we know that the depravity and horror of war is still alive in Syria and other war-torn countries that carefully vetted refugees are escaping from. As an organization that cares about the most vulnerable in our society and believes in promoting nonviolent, peaceful resolutions to conflicts, we at the Intercommunity Justice and Peace Center oppose any plan to reduce refugee admissions, especially a plan that explicitly targets and excludes Muslims from being resettled in the United States. We advocate strongly against policy changes that deny refugees access based on their religion or country of origin.As people of faith, we must welcome the stranger, welcome people who are suffering, and provide for those who are fleeing war, terror, and persecution. This is central to the message of the Gospel and a core Christian belief. Promoting racist and xenophobic messages, by equating all members of one religion to a radical sect, is dangerous and misguided.IJPC is proud to work in solidarity, peace, and justice alongside CAIR and with the Muslim community. We stand in resistance to President Trump’s executive orders and divisive rhetoric against refugees and their allies.Please call your Member of Congress and share your concerns with them. Tell them that we believe refugees and Muslims are welcome in our community.

Ruqayya Abu Eid, 13Ruqayya was shot dead by a private security guard after she allegedly attempted to stab him in the Anatot settlement near Jerusalem on 23 January.A Palestinian member of Israel’s parliament, the Knesset, condemned the girl’s slaying. “Even if she had a knife, it would have been possible to arrest a girl that age instead of killing her,” Esawi Frej of the Meretz party said.Haaretz reported that Ruqayya died of a single bullet wound to the heart.“I have no explanation for her decision,” the girl’s father told the paper. “There were two guards there, and they could have overcome her. A little girl. They are trained and armed, you know, so how is it they could not arrest a little girl of 13? Was a girl of 13 a threat to them? Whatever she planned to do, they could still have arrested her.”Ruqayya was laid to rest in the village of al-Karmel east of the West Bank town of Yatta, near Hebron.

Source: These are the Palestinian children killed by Israel in 2016 | The Electronic Intifada

For all of the furor and bullshit though, the important thing to remember is that allegations of voter fraud always tie back to making it more difficult to register to vote and instituting strict laws requiring voter ID. As the NAACP laid out in a recent press release decrying Trump’s repeated lies that voter fraud is what cost him the popular vote, a Washington Post study showed only “31 alleged cases of in-person voter fraud among the over 1 billion votes cast in the United States.” On the other hand, a federal court found that North Carolina’s laws restricting early balloting specifically targeted black districts in the state. And on the third weird mutant hand, the only people caught committing voter fraud in the 2016 election were…Trump voters.

It took weeks for Facebook to remove a 12-year-old girl’s December suicide video (she had broadcast it on the social network). This past week, a man in Los Angeles shot himself in his car while on Facebook Live and a Miami teen was allegedly using Facebook Live as she hanged herself with a scarf.A Facebook spokeswoman “said Facebook aims to interrupt livestreams that go against community standards ‘as quickly as possible… We also suggest people contact law enforcement or emergency services themselves if they become aware of something where the authorities can help.'”If someone you know exhibits warning signs of suicide: do not leave the person alone; remove any firearms, alcohol, drugs or sharp objects that could be used in a suicide attempt; and call the U.S. National Suicide Prevention Lifeline at 800-273-TALK (8255) or take the person to an emergency room or seek help from a medical or mental health professional.

Forest fires are common in Chile’s parched, wooded areas during the hot summer months. However, serious drought has made the fires this year particularly difficult to contain. Chile’s president, Michelle Bachelet, has called the fires “the greatest forest disaster” in the Chile’s history. The country has turned to the international community, requesting aid to tackle the wildfires. Heraldo Munoz, Chile’s foreign minister, said the United States, Canada and various other countries have offered help. Meanwhile, Bachelet tweeted on Thursday that the country had accepted additional super tanker planes and helicopters from Russia.

The gene, known as MCR-1, was first identified in China in November 2015 in Escherichia coli samples from pigs, pork products, and a handful of human cases. It has since been detected in more than 30 countries, including the United States. The emergence of the resistance gene was believed to be connected to widespread use of colistin in Chinese agriculture. China banned use of the drug in animal feed in 2016, based in part on the findings of that study.Though there have been few cases so far of human infections involving the gene—which has mostly been found in animals—MCR-1 has become a significant public health concern because colistin is one of the few antibiotics left that can be used to treat multidrug-resistant infections. And because the gene is carried on mobile pieces of DNA called plasmids, it can be passed not only to different strains within a single family of bacteria—such as E coli—but also to different types of bacteria.Among the most worrisome scenarios is the emergence of bacteria that harbors the MCR-1 gene along with other antibiotic-resistance genes. If the superbug carbapenem-resistant Enterobacteriaceae (CRE) were to acquire the gene, for example, it could present clinicians with infections that are nearly impossible to treat with current antibiotics.

The German government has reiterated its appeal to EU members to “stick together” – not only in the power struggle against Russia, but now also against the new US administration.[12] The common foreign and military policy is the means of choice to not only assure a leading position for the EU in world policymaking, but also to weld the alliance together against internal criticism. In early 2010, Germany’s Foreign Minister, Guido Westerwelle, declared that the “European project of a common security and defense policy could be an engine for Europe’s continuous consolidation.”[13] This was at the beginning of the Euro crisis, with its multiplying centrifugal forces escalating.