“So, look, when President Obama was there two weeks ago making a speech, very nice speech,” Trump said, according to the transcript of the interview. “Two people were shot and killed during his speech. You can’t have that. They weren’t shot at the speech. But they were shot in the city of Chicago during his speech. What — what’s going on?”The city had no slayings for about 24 hours before and after Obama’s speech, which lasted from 8:02 to 8:53 p.m. A man was shot about 20 minutes after the speech about eight miles away in the West Side’s Lawndale neighborhood, but that victim survived, according to Police Department data.

In 2013 alone, we apparently bought some two million tons of Coronas, Modelos, and Tecates from Mexico, and beer is now Mexico’s biggest agricultural export to the US.

Source: PS, We Have NAFTA To Thank For Plentiful Coronas And Modelos In American Bars: SFist 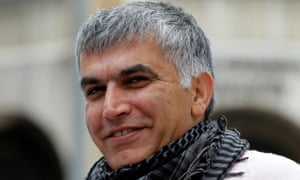 He also says: “The UK is setting a dangerous precedent in providing arms and political support to Bahrain, worth millions, while watching in silence as rights campaigners are harshly punished.”Rajab has also been prosecuted in a separate case for “spreading rumours in wartime”, for “insulting a neighbouring country” and for “insulting a statutory body”.One set of charges relate to Rajab’s criticism on Twitter of the Saudi war in Yemen. The other refers to his exposure of torture in a Bahraini prison.He faces up to 17 years in prison between both cases. He has been held in pre-trial detention without bail since his June arrest, largely in solitary confinement. Rajab’s next court appearance is set for 8 February.