Swedish prime minister Stefan Löfven and German chancellor Angela Merkel held a joint press conference today during which they denounced immigration restrictions imposed by US President Donald Trump and reaffirmed their nations’ commitment to each other.

Robyn – Dancing On My Own (Rex The Dog Remix)

He suggested in his election campaign that in order to keep the US “safe” he would look to tighten the rules around those travelling to the US from France.In July last year Trump suggested the United States could suspend immigration from what he called countries “compromised by terrorism” (including France) until vetting mechanisms were in place.“We have problems in Germany, and we have problems in France” – both countries rocked by fatal attacks claimed by the Isis group.When asked specifically if the proposal would limit immigration from France, he said: “They have been compromised by terrorism.””And you know why? It’s their own fault. Because they allowed people to come into their territory.”While some of those who attacked Paris were from foreign countries, including Iraq and Belgium, several others were French nationals.It appears many French citizens with dual-nationality for countries like Somalia, Iran and others on the list will already be impacted by the ban. Air France said it had blocked some 15 passengers from travelling to the US.

Source: Will French citizens be next in line for a Trump travel ban? – The Local

“The essential and also resolute fight against terrorism in no way justifies general suspicion against people of a specific faith, in this case people of the Muslim faith or people of a certain background,” she told reporters in unprompted remarks about measures enacted by US President Donald Trump.”This approach in my view contradicts the basic tenets of international aid to refugees and international cooperation,” she said ahead of talks with Ukrainian President Petro Poroshenko.Merkel said her office and the German foreign ministry would do “everything in their power” to clarify the legal situation “in particular for those with dual citizenship” of Germany and the blacklisted countries.She said Germany would “emphatically represent their interests to achieve legal certainty” for those potentially affected by the ban.

Source: Merkel steps up criticism of ‘anti-Muslim’ US travel ban – The Local

What do you make of the implementation of this order? I think the implementation was just simply emblematic that President Trump is just simply not competent and capable of being President of the United States. This was rushed through. It did not go through individuals within the administration, lawyers and others, who have expertise in the area of immigration law. It was simply pushed through in haste and without consideration and you could see it in the results on the ground. It makes the United States look like a banana republic. The executive order has left travelers from those countries not being able to travel to the US despite holding a valid US visa, and has seen many who’ve arrived in US airports being detained. Organizations like the ACLU went to court on this and scored an initial legal win. But what exactly does that mean, because the legal standoff has apparently still not been resolved? The win the ACLU won in Brooklyn and the other rulings by courts in the country in Virginia, Seattle and other cities are basically just preserving the status quo. They are preventing the government from deporting or removing individuals who traveled to the United States after the order was implemented. I don’t believe that the orders affect anybody directly who has not yet traveled to the United States, but it prevents those people who got to the United States and who have been trapped in the airport from being deported by the United States to their home country until this case has been resolved. 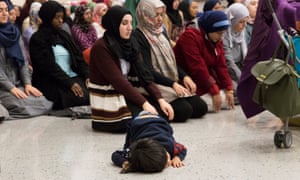 On Sunday afternoon, four Democratic members of the House of Representatives arrived at Dulles airport in Virginia on word that people had been detained and denied access to lawyers.“We have a constitutional crisis today,” representative Don Beyer wrote on Twitter. “Four members of Congress asked CBP officials to enforce a federal court order and were turned away.”Representative Jamie Raskin, also at the airport, tweeted that the federal agency had given “no answers yet” about whether agents were ignoring the courts. Raskin joined several other attorneys there, including Damon Silvers, special counsel at AFL-CIO, one of the groups trying to help visa holders.“As far as I know no attorney has been allowed to see any arriving passenger subject to Trumps exec order at Dulles today,” Silvers tweeted on Sunday evening. “CBP appears to be saying people in their custody not ‘detained’ technically & Dulles international arrivals areas not in the United States.” 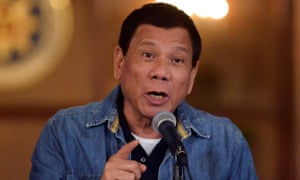 President Rodrigo Duterte said he was “embarrassed” that anti-drugs officers had abused their power to engage in kidnapping, leading to the death by strangulation of Jee Ick-joo, on the grounds of the national police headquarters.Duterte said other suspects were still at large and gave them 48 hours to turn themselves in, or have a dead-or-alive bounty on their heads of 5 million pesos ($100,000).His police chief, Ronald dela Rosa, said the breakup of anti-drugs units was necessary to rebuild them, but it could disrupt the progress of the campaign.“We will dissolve all anti-drugs units in the police,” he told a joint news conference with Duterte, when asked if he would overhaul the police. “I will do my job to the best of my ability. I hope I will not fail the president and the Filipino people.”