Every womanizing culture is sleazy in its own special way. In America it’s frat-boy sniggering. There’s the Mediterranean suffocating pseudo-romantic come-ons, or the conservative Middle Eastern trick of punishing women for men’s sexuality.In Israel too, sexual aggression expresses a dark underside of national and cultural flaws: swaggering ego-driven entitlement, the unquestioned certainty that specific people and positions are above both law and morality. If they break it, their buddies will cover up for them — that is the sensual intoxication of sheer physical military power.In a bygone era, these traits were romanticized and marketed to Israel’s people and outside admirers alike. Israelis prided themselves on being brash and direct; they disregarded rules to release creative problem-solving genius that is the secret of the Jews’ mythologized, centuries-old resilience. Israel views itself as the triumph of the gun over the ghetto. For heroic, nation-saving military men, helping themselves to women’s bodies seemed like a natural extension of that.When values are so deeply rooted in society, they become transparent and unquestioned. But when so many women (one high-profile man was accused by no less than 14 people) are able to step outside and see what was previously invisible, it means the silent rules that define women’s natural role in society are no longer functioning. The more visible these values become, the more flimsy their force.The women of 2016 may not have realized it, but their actions conveyed that entitlement, impunity, and brash invasiveness — at least as manifested in sexual aggression — are now anathema. No longer do military, religious, or political causes justify the sacrifice of their physical and spiritual integrity. Manipulate these causes for self-satisfying urges, and it won’t end well.

Source: +972’s Person of the Year: The women standing up to sexual harassment | +972 Magazine 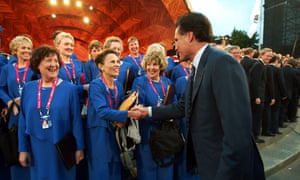 The member of the Mormon Tabernacle Choir, Jan Chamberlin, posted her resignation letter to leaders of the 360-member choir on her Facebook page on Thursday.“It is with a sad and heavy heart that I submit my resignation to you and to Choir,” she began. “I am praying that Jesus will help me get through this email before I totally break down.”Writing that she had spent “several sleepless nights and days in turmoil and agony”, she added: “I love you all, and I know the goodness of your hearts, and your desire to go out there and show that we are politically neutral and share good will. That is the image Choir wishes to present and the message they desperately want to send.“I also know, looking from the outside in, it will appear that Choir is endorsing tyranny and facism by singing for this man.”She continued: “Tyranny is now on our doorstep; it has been sneaking its way into our lives through stealth. Now it will burst into our homes through storm.”