Estonians eye Russia’s annexation of Crimea and United States President-elect Donald Trump’s comments about reining in NATO spending, which provided a bulwark against Russian expansion during and after the Cold War.Now thousands of Estonians, many without previous military experience, have flocked towards the EDL for specialised conflict training.They learn to fire weapons, recognise Russian armoured vehicles, and live in the country’s vast forests.Some of the more experienced recruits are given instructions on how to make roadside bombs. Others learn how to run a field kitchen capable of feeding thousands of people.The EDL chief, Commander Meelis Kiili, puts it simply — “if you want peace prepare for war”.

FBI Director James B. Comey and Director of National Intelligence James R. Clapper Jr. have backed a CIA assessment that Russia intervened in the 2016 election in part to help Donald Trump win the presidency, according to U.S. officials.Comey’s support for the CIA’s conclusion suggests that the leaders of the three agencies are in agreement on Russian intentions, contrary to suggestions by some lawmakers that the FBI disagreed with the CIA.“Earlier this week, I met separately with (Director) FBI James Comey and DNI Jim Clapper, and there is strong consensus among us on the scope, nature, and intent of Russian interference in our presidential election,” CIA Director John Brennan said in a message to the agency’s workforce, according to U.S. officials who have seen the message.

Meet The Toilet Light You Didn’t Know You Needed

A man, seen in surveillance video as wearing a gray hoodie and holding what appears to be a gun, entered Lotions & Lace in San Bernardino on Wednesday night at about 9:45 p.m., just 15 minutes before the shop closed. He was seen striding through the racks of lingerie to the counter where he immediately encountered two female employees and demanded the cash from their till. But, the alleged robber got more than he bargained for when one employee—identified by ABC 7 only as Amy—decided she didn’t have time for his shenanigans.”I just thought he was trying to be funny, to scare us. But then I saw the gun and it was like, really? I don’t have time for this,” she said.Amy suspected that the gun he was carrying was a fake, and was not scared. She instead described herself as “really irritated.” The video depicts the two employees yelling at the man and flinging a variety of sex toys at him until he leaves the shop.

The oft-repeated “if you see something, say something” mantra appears to have worked out in the case of an alleged attack at a Metro Red Line station that was observed and recorded by a bystander.Witness Lake Cunningham recorded a video of an alleged assault on Tuesday morning at about 1 a.m. at the Hollywood and Vine station. The video depicts a younger white man punching an older black man in the head on the station platform. Cunningham also claimed that the younger man kicked the older man in the face, though it is not seen on the video. Though police had been called at the time of the alleged attack, all involved parties had departed the station by the time they arrived.Cunningham’s video was widely distributed via social media and various news outlets, and authorities say they subsequently received numerous tips, CBS Los Angeles reports. One of those tips involved a 32-year-old Culver City man named James A. Hanson, who police say confessed to being the younger man in the video. Hanson was arrested Thursday afternoon at about 1 p.m. He is currently being held in lieu of a $50,000 bail, according to Fox 11.”Hanson has admitted to his role in the assault and has been booked at the sheriff’s Century Regional Detention Facility,” L.A. County Sheriff’s Office Deputy Ramon Montenegro said.The victim in Cunningham’s video also came forward following news reports about the incident and was treated for injuries suffered during the assault.

With Christmas just around the corner, here is a recipe for traditional Swedish festive rice pudding.Risgrynsgröt (rice porridge) has been an important Swedish dish for centuries. It can be served at any time of the year, and is almost always served at julbord (Christmas buffet).

1. Put the rice, water and salt in a saucepan and bring to the boil. Cover and simmer for 10 minutes.

2. Add the milk and cinnamon stick. Mix well and heat until the mixture is hot, but don’t let it boil.

3. Cover again and leave the pudding on a very low heat until the rice has absorbed all the milk. This will normally take between 30 and 45 minutes. Don’t stir the rice and keep it covered as much as possible.

4. Once the milk has been absorbed, remove from the heat and leave covered for another 10 minutes. Then stir in the sugar and butter.

At Christmas, hide an almond in the pudding before serving.

Tips- Take care in stage 3 as the pudding will burn very easily.-

This recipe is based on a traditional Swedish recipe which was for 4 people, but I think it could easily serve 8.-

A creamy cold version, called Ris a la Malta, is served with a fruit sauce and is perhaps even more popular. 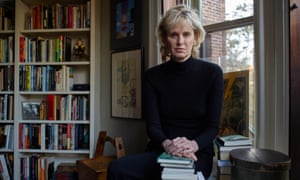 “He was elected because his exploitation of the big lie technique worked, because misogyny is alive and well among women and men,” she says. “He was elected because, as a study at Yale demonstrated, when faced with an identical description of an ambitious politician, both men and women respond to a female candidate with feelings of ‘moral outrage’, but have no such feelings for a power seeking male candidate.” It goes back to what she has been saying about the science of perception, the kinds of expectations we have for men versus those for women. “If she’s emotional, then she’s like a woman. If she’s not emotional, then she’s cold and heartless,” she says of Clinton. “Whereas Trump actually has played the female role: the out of control, angry hysteric. And yet, he has been perceived as a robust, masculine figure by a large portion of the US public. The possibilities for a woman are infinitely more narrow.”

Source: Siri Hustvedt: ‘Trump was elected because misogyny is alive and well’ | Books | The Guardian

For Louise Hansen, the story has been the same every time she’s flooded: The water starts to creep into her house in the middle of the night.In 2009 — the first time her west Houston home flooded after she moved into it about a decade earlier — she figured it was an anomaly. Then it happened again in 2015. And again in 2016.Three times in less than 10 years — for a home that’s not in any floodplain identified by the Federal Emergency Management Agency. “It’s actually paralyzed me,” said Hansen, who grew up in the area and is now selling her house just for the lot value. “I just don’t think I can go through another flood.”Many of Hansen’s neighbors, who live in an area of Houston known as Memorial City, have had the same experience. They’ve flooded in 2009, 2015 and 2016, and none of them live in any known floodplain.