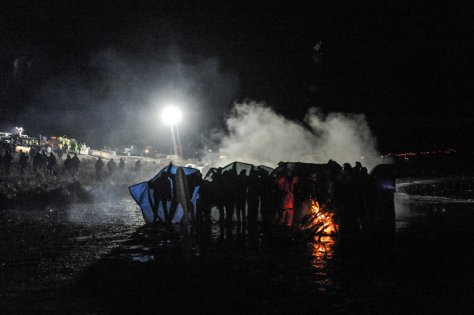 Sophia Wilansky, 21, who grew up in the Bronx, rested in a Minneapolis hospital bed, her father by her side, recovering from surgery to try to save her left hand and arm after an explosion at a pipeline protest in North Dakota this week.“From an inch below the elbow, to an inch above her wrist, the muscle is blown off,” her father, Wayne Wilansky, said from the hospital, Hennepin County Medical Center. “The radius bone, a significant amount of it, is blown away. The arteries inside her arm are blown away. The median nerve is mostly blown away.”As many as 20 operations lie ahead, Mr. Wilansky said, and it was unclear whether she would keep the arm.

“I still love my country, I still love my family, and I am still an honorable man,” he says in a Southern drawl in a scene from the movie trailer. “If I am the bad guy, what does that make you?” {Not a turncoat or a traitor!”}

What biologists discovered turned out to be even more frightening: the reappearance of a parasite known as the New World screwworm fly that had not been seen in the United States since the 1970s and had been considered eradicated.State and federal officials are hopeful that the infestation, which so far is restricted to Florida’s southernmost Monroe County, is being controlled. Symptoms were first reported in wild deer in July, and laboratory tests in late September confirmed the presence of the screwworm, which is the larva of the screwworm fly.The infestation has the potential to cause catastrophic damage to livestock and is being seen by some experts as a reminder of the challenges of controlling the spread of diseases and infestations in a world of limitless global travel and trade.

I passed signs boasting “98% of Our University is Nonviolent!” while on my way to a sexual assault survivors group to meet with twenty other women who were raped on campus in the last year.Hers: four men behind the science building, her face grating the asphalt, turns taken from behind. Two officers found her, they took no notes, they asked her to calm down, she was hysterical.Hers: a rapist with a name engraved on some campus building, a rape kit that showed her lacerations, a rape kit that showed his semen, a rape kit that was thrown out prematurely, a rapist that walked.Hers: a professor, but he was tenured.Hers: a long walk to the police, freshly raped, dress wadded between her legs, bloodied from all that tearing. The officer asked if she was sure it wasn’t her period. “Are you sure?” he pressed. “Are you sure? Are you sure?”Hers: a drug in a drink at a frat party, her body left between the cars in a gravel parking lot, a mandatory alcohol-education course courtesy of the Institution. The class met on Fridays; she heard the frat parties’ music through the cinder-block walls.Once, we counted all the other rape survivors we knew. There should have been two hundred of us there, not twenty.And at the end of the semester, the Institution reported zero assaults. They hung banners in the halls.

Source: I Was Raped / I Was Battered – Guernica / A Magazine of Art & Politics