Today, the Examiner writes that Warner and Mitchell are closer to getting their wish. Supervisor Norman Yee introduced a resolution last week to permit bike memorials as well as to implement “an immediate moratorium on the removal of any ‘Ghost Bike’ for one year so long as they are not obstructing local ordinances, such as blocking pedestrian egress.”According to a statement from Yee, “ghost bikes are powerful reminders to our community that we still have a long way to get to Vision Zero,” or the city’s goal of zero traffic related deaths by 2024. The resolution calls on the Bicycle Advisory Committee to form a partnership with Public Works and the San Francisco Municipal Transportation Agency “for an ordinance for the permitted placement of ‘Ghost Bikes’ or other memorials by citizens who wishes to do so.” 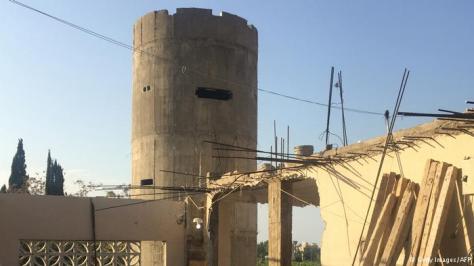 “The Lebanese authorities are building an apartheid wall surrounding the Ain al-Helweh camp in Sidon,” tweeted an account called Yarmouk News. Commentators on social media have used the term apartheid to describe the wall, claiming that it isolates and separates the Palestinians in the camp from the rest of Lebanese society.After the war of Arab-Israeli war of 1948, many displaced Palestinians were forced to flee to Lebanon. The majority of these Palestinians remain stateless refugees even today. The United Nations Relief and Work Agency (UNRWA) provides food, medicine, education and other necessities to the Palestinian population in Lebanon. The Lebanese government bars Palestinians from taking white-collar jobs such as in the law and engineering fields. Palestinian refugees in Jordan, on the other hand, are eligible for Jordanian citizenship.

Babies exposed to Zika virus before birth can go on to develop microcephaly and other complications after they are born, according to a study today from Brazil.In other research news, Chinese scientists who did experiments in mice found more evidence that the virus may damage the male reproductive system.

Vivaldi now includes a first for web browsers. We’re giving users the ability to go beyond the browser and into the smart home by integrating with Hue color lights from Philips.After enabling Hue in Vivaldi Theme Settings, a tap on the Philip Hue Bridge confirms the connection. Selecting which lights Vivaldi should control, the browser will synchronize your physical surroundings with the color of the web. This opens the door to a thrilling direction. We’re very excited to hear the unique ways that users take the leap from the browser into physical space.

The writing is as true as one can get and gives insight into every woman’s struggle.

Time had passed, and it was too late to grow beyond what had been ingrained in me for years. Yes, I broke from tradition and convention, but I remained within the structure created by men. The ceil…

Source: In the Shadows of Men (excerpts)

Source: The Arizona Tribe That Knows How to Stop a Trump Wall – Intercontinental Cry

In the short term, when it comes to securing the border, there are no easy answers or solutions. But when it comes to working with tribal nations on the issue, in the eyes of the Tohono O’odham, Trump’s proposed wall represents either gross ignorance or blatant disregard for tribal sovereignty. And if construction begins, it could signal the winding back of clocks on U.S.-tribal relations on the border.

“I can’t even imagine how far it would set us back,” says Tatum. “More than a hundred years.”

{I cannot imagine that Mr. Trump could care a whit about tribal law, or the wishes of the Tohono O’odham – he cares about Trump and that is about as far as his caring goes.}