“I have heard from many, many evangelical women who are horrified by Christian leaders ignoring this as an issue,” Moore told me. He says these women leaders have “spent their entire life teaching girls to find their identity in Christ and not in an American culture that sexualizes and objectifies them”—and they are now disgusted that evangelical men are not standing up and speaking out. Nish Weiseth, popular Christian blogger and author said that when it comes to Christian men still supporting Trump, “Disappointed seems like too soft a word. It’s devastating.”

In the wake of the release of the Movement for Black Lives platform, the opposition of many Jewish organizations — and the silence of progressive organizations, many of whom had profoundly shaped my vision of justice — was stinging. The fervent, public opposition to Black Lives Matter was particularly stark considering how few Jewish organizations have publicly condemned Republican presidential nominee Donald Trump. What I found striking about reactions to the platform was what they demonstrated about the Jewish community’s support for the occupation. The Jewish community can no longer acknowledge the full depth of black oppression in this country, fearing that if they do they might reveal how black parents instructing their children to refrain from wearing hoodies around the police is eerily similar to a Palestinian parent instructing their child to wear a cross at a checkpoint.This past year we saw too many in the Jewish establishment continue to support the occupation, publicly reject the Movement for Black Lives, and remain silent in the face of Trump’s rise. This coming year we will witness the 50th year of occupation, a new president, and a emboldened ultra-nationalist community in the United States. I can no longer sit silently in the back of a synagogue or give money and time to progressive Jewish organizations while our community ignores injustice. There is no better time to take action.

Source: Occupation denial is pushing me out of my Jewish community | +972 Magazine

You’re may want to hold off on eating Nestlé Drumsticks for a bit, as the company has issued a voluntary nationwide recall of the ice cream desserts following positive test results for listeria in their Bakersfield factory.The recall is more of a better-safe-than-sorry one. According to the FDA, no one has been sickened and none of the actual Drumsticks have tested positive for listeria. However, pieces of production equipment at the factory have tested positive. Certain ice cream products were mistakenly sent out to stores because of an error in logging test results, according to the company.

Acknowledging for the first time that he had avoided paying federal income taxes for years by claiming nearly a billion dollars in losses in 1995, Mr. Trump then tried to shift attention to his Democratic opponent, Hillary Clinton, accusing some of her wealthy supporters of exploiting tax laws to their own advantage.“Many of her friends took bigger deductions,” Mr. Trump said. “Warren Buffett took a massive deduction.”Actually, he did not.“I have paid federal income tax every year since 1944,” Mr. Buffett wrote in a letter released Monday.“My 2015 return shows adjusted gross income of $11,563,931,” he revealed. “My deductions totaled $5,477,694.” About two-thirds of those represented charitable contributions, he said. Most of the rest were related to Mr. Buffett’s state income tax payments.

Mr. Buffett, the chairman of Berkshire Hathaway and one of the richest men in the world, went on to say: “My federal income tax for the year was $1,845,557. Returns for previous years are of a similar nature in respect to contributions, deductions and tax rates.”

Last year, Mr. Buffett paid about 16 percent of his reported income in federal income taxes.“I have copies of all 72 of my returns,” Mr. Buffett added, “and none uses a carry forward,” the provision that allows taxpayers like Mr. Trump to use losses from one year to avoid paying personal federal income taxes both on some previous tax returns and in future years.Mr. Trump had previously claimed, without producing any evidence, that Mr. Buffett declared $873 million in losses. 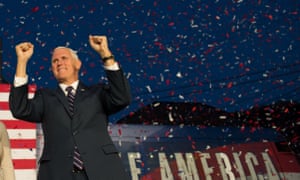 Scenario: Trump and his son Eric are caught digging up Alexander Hamilton’s grave.

Would Pence quit? Pence would appear alongside Trump in a video explaining that the exhumation of one of America’s founding fathers was no more disgraceful than liberals’ attempts to claim the leaders of the American revolution were black and Hispanic via the medium of a Broadway show.

Scenario: Trump finally releases his tax information, revealing that in 2014 he donated $1m to Isis.

Would Pence quit? Pence would claim that the donation was taken out of context. When pushed to contextualize it, Pence would say Donald never made the donation in the first place, chuckling.

Scenario: While campaigning alongside Trump in Arizona, Pence notices that one of the candidate’s opening tunes is by Elton John.Would Pence quit? Pence would resign from the campaign immediately.

Source: What could make Mike Pence finally leave the Trump campaign? | US news | The Guardian

But to many victims of sexual assault, Mr. Trump’s words struck a particular nerve. It was not simply that he is the Republican presidential nominee, and that a hot microphone had captured him speaking unguardedly. It was his casual tone, the manner in which he and the television personality Billy Bush appeared to be speaking a common language, many women said, that gave Mr. Trump’s boasts a special resonance.What he said and how he said it seemed to say as much about the broader environment toward women — an environment that had kept many of these women silent for so long — as they did about the candidate. And Mr. Trump’s dismissal of his actions as “locker room talk” only underscored the point.“This is RAPE CULTURE — the cultural conditioning of men and boys to feel entitled to treat women as objects,” Jill Gallenstein, 40, a retail executive in Los Angeles, wrote on Facebook. “It’s women and girls questioning what they have done to provoke such behavior. It’s the dismissing of this behavior because ‘it’s the way it has always been.’ It’s justifying the behavior because other powerful men have done it too. ‘Locker room talk’ normalizes this behavior — what we say matters.”That locker room talk also seemed to create its own momentum online.“I’ve never really thought about these moments cumulatively before,” Julie Oppenheimer of Chicago wrote on Facebook, after listing a few episodes of her own, including being kissed on the mouth by the janitor at her synagogue when she was 13. “In part, because they seem so ‘small’ compared to what many have experienced — not worthy of consideration. That’s because all of us already live in Trump’s world, where these behaviors are commonplace.”Laura Sabransky was one of many women who added to Ms. Oppenheimer’s thread, writing that she had been given date-rape drugs three times between high school and college. “I call Trump a walking trigger alert,” she said in an interview. “He is triggering anxiety and PTSD-like reactions in women, me included.”

Source: With ‘Tweet Me Your First Assaults,’ a Protest Movement Is Born – The New York Times

Native American music is as vast and diverse as the people who create it, and each tribe has its own musical approach and style that has been passed down for centuries. Music is at the center of Native American culture, used in religious rituals, for healing, for accompanying work or games and for social gatherings of all kinds. For most Native Americans, music and song is not a human invention but something given to them by spirits to facilitate interaction between the heavens and Earth.Lyrics are filled with symbolism, and singers sometimes use made-up sounds to help create the stories and rhythmic poetry. Vocals and chanting are ubiquitous in traditional Native American music, and flutes and drums are the most common instruments found throughout the various tribes.

So it was abundantly clear that the GOP candidate didn’t care to discuss policies or issues with a single undecided voter at the town hall last night; he far was more obsessed with settling scores with the Clintons, mostly imaginary, and to exonerate himself (by his own standards). He eagerly brought the tenor of the debate down to the sleazy, smirking level of one of his many Howard Stern show appearances. Trump frequently gaslighted Clinton, called her “a liar” (at least nine times according to CBS News) and “the Devil,” and at one point sputtered that she had “hate in her heart.” He seemed unaware of how Congress actually worked, accusing former New York Senator Clinton for not having the magical ability to pass laws or enact legislation by herself, as if by royal decree or fairy dust. He was a hot mess of aggressive body language, crossing repeatedly into Clinton’s personal space, especially when she passed to his side of the stage to address a question posed by one of the town hall participants. He seethed and scowled over her shoulder, a furious, hulking manchild accustomed to intimidating women by proximity.

And then in an open letter to the woman that was published in The New York Times:

Maybe I should have let it go. Turned the other cheek. We had just gotten out of church, and I was with my family and some friends on the Upper East Side of Manhattan. We were going to lunch, trying to see if there was room in the Korean restaurant down the street. You were in a rush. It was raining. Our stroller and a gaggle of Asians were in your way.

But I was, honestly, stunned when you yelled at us from down the block, “Go back to China!”

I hesitated for a second and then sprinted to confront you. That must have startled you. You pulled out your iPhone in front of the Equinox and threatened to call the cops. It was comical, in retrospect. You might have been charged instead, especially after I walked away and you screamed, “Go back to your fucking country.”“I was born in this country!” I yelled back.

It felt silly. But how else to prove I belonged?

Source: NY Times editor told to ‘Go back to China! Go back to your fucking country!’ by woman in streets of NYC: Shanghaiist

Dear Donald Trump, For the last six months, I have followed in complete and utter awe your proposal to ban Muslims from entry into the United States of America. Your plan is, for lack of a more bea…

Source: Taha Bali: 24 Points on Your Obsession with Muslims