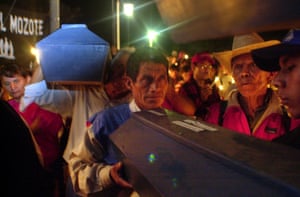 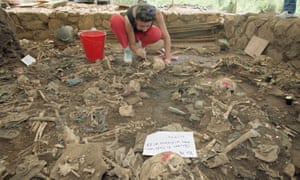 The reopening of the case follows formal complaints by local human rights groups and victims families seeking justice for those killed in El Mozote.Those pushing the case seek a truthful accounting of what happened and the facts surrounding who ordered the massacre, Gonzalez said. They are not seeking punishments such as jail terms, he added, but want those responsible to admit their roles and ask for forgiveness.Judge Guzman has ordered military records from the time of the massacre to be turned over, as well as additional records on 14 named ex-army and security officials.

Doubts about AuthenticityMomentous Syria Interview Under FireGerman journalist Jürgen Todenhöfer filmed an interview with an alleged rebel commander near Aleppo. The claims made by the commander — that the US was supporting al-Qaida — made headlines around the world. But was the interview authentic?

“It’s like we’re going back in time,” said Marc Matsuo of Las Vegas, who grew up in Hawaii with parents of Japanese ancestry and recalled how his family used to feel uncomfortable expressing their heritage, to the point they would not speak Japanese. He now helps register Asian-Americans to vote. “I was always brought up that you don’t talk about religion, you don’t talk about politics. Not anymore.”Though Asian-Americans are still just 4 percent of the overall eligible voting population, their political power is concentrated in important swing states like Nevada and Virginia, where both parties have been building on their efforts to reach out.In and around Las Vegas, home to one of the country’s largest Asian populations, this means printing campaign leaflets in Korean, having a Vietnamese translator on standby at speeches, publishing op-ed articles in the local Filipino newspaper and hiring employees who know enough Mandarin to recruit voters at the Chinatown seafood market.

Watching the water dispute warily are members of the Winnemem Wintu, a small Native American tribe that considers the slopes of Mount Shasta sacred.According to tribal beliefs, one of the springs on the mountain is the place where animals and mankind emerged into the world. Six years ago, for the first time in the oral history of the tribe, that spring dried up, according to Luisa Navejas, a tribe member.The water around Mount Shasta is not limitless, she said.“This mountain is calling us now, and we need to listen,” Ms. Navejas said of the inactive volcano.“This mountain will talk,” she said. “The time will come.”

Occupation wears on everyone – the occupied, the occupier, the watchers, the reporters, the land. Goodness and grace are never entirely worn out but harder to see and feel as the grayness of denial blurs everything. Being able to feel anger and remorse are good signs that you are still alive, capable of being hurt and willing to risk for love, grace, and mercy.

I am still taken with all the reactions of yesterday, in regards with abu Mazen participation in Peres’s funeral.

I am not sure if I need to put any word of ration to explain all the rage we Palestinians experienced yesterday. There are many things that remain symbolic in life, and among them in the best scenarios of a peaceful solution, forgetfulness is not related to forgiveness.

We can assume that Peres died as a man of peace, which is of course by all means not true, each time I mention the word Peres, what I see infront of my eyes is Qana massacre in 1996, two years after his receiving the noble price for peace. We can assume life and peace are prospering, among a death of a man like him; I cannot, as a Palestinian is part of. This should be a rule. I don’t think Peres would…

Berlin’s ostensible “peace offensive” comes at a time when, various reports are exposing – independently from one another – that Washington is considering supplying the insurgents with man portable air defense systems (“MANPADS”) – or has already begun to do so. As was made known from US government circles as well as from insurgent militia contact persons, the “MANPADS” are supposed to be delivered to the militias via Saudi Arabia and Turkey. The Saudi government is convinced that the Russian military can be forced to retreat, as the Soviet troops had done in the 1980s in Afghanistan, say US government representatives. At the time, the “stinger” missiles had permitted the mujahidin the capability of shooting down Red Army helicopters, inflicting massive losses, which ultimately led to a Soviet troop withdrawal from the country. The fate of Afghanistan thereafter is well known. It was reported that Washington has enticed the insurgents with prospects of “MANPADS,” merely for shooting down Syrian helicopters, but not those of the Russians.[10] No one should believe that the insurgents will abide by this. Experts also warn that it is not only to be expected that if “MANPADS” are provided to Syrian insurgents, Iran, for example, could deliver “MANPADS” to the Houthi insurgents, its allies in Yemen, fighting Saudi troops. Above all, the Syrian insurgents could also use those “MANPADS,” they are due to be furnished, near airports, to shoot down civilian airliners.[11] It becomes that much more volatile, since from all experience, it can be expected that a large amount of the “MANPADS” will wind up in the hands of al Qaeda’s Fatah al Sham. Experts estimate that about half of the weapons that have been delivered to insurgent militias in Syria, have ended in the hands of jihadis. The same threatens to happen again.