Interesting developments on my home island; this AP article writes about the growing interest in farming and producing home-grown food in Puerto Rico, calling it an “agricultural renaissance.”  NBC…

The history of slavery in the United States justifies reparations for African Americans, argues a recent report by a U.N.-affiliated group based in Geneva. This conclusion was part of a study by the United Nations’ Working Group of Experts on People of African Descent, a body that reports to the international organization’s High Commissioner on […]

Ian Fleming’s James Bond Based on Porfirio Rubirosa According to New Research by Forensic Historian Daniel J. Voelker. Through a series of connections that include Noel Coward, Errol Flynn, Doris Duke, Rita Hayworth and a host of Caribbean locations, litigator and forensic historian Daniel J. Voelker has made a compelling case establishing mid-19th century playboy […] 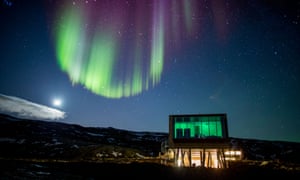 Street lighting in Reykjavik has been switched off for an hour to give residents of the Icelandic capital a better view of the aurora borealis.Most parts of the world’s northernmost capital city, including the centre, went dark from 10pm on Wednesday.“Residents are invited to join in by turning out the lights at home so as to maximise the darkness and minimise light pollution,” the local government said in a statement.The aurora borealis, or northern lights, are multicoloured natural illuminations caused by interactions between solar winds and the Earth’s magnetic field.Posts on social media showed the colourful lights filling the night sky above the city.

And by saying nothing, Donald Trump said everything.By saying nothing, he confirmed what any thoughtful person has known for months — that his campaign for president is really about racism.Unfair trade deals, tax cuts, job creation, phony chants of change? They’re all accessories.The real message of Trump’s campaign — the one that appeals to all the extremists and haters who help fill his gigantic basket of deplorables — is raw racism.There’s nothing the least bit complicated about Trump’s message, an unmentioned promise so powerful it’s capable of moving his supporters to violence. It goes like this: I’ll keep the blacks in their place and kick the Mexicans and Muslims out. Together, we’ll make America white again.But he won’t.Because he can’t.Top elected officials in Ohio, from Sen. Rob Portman on down, should be ashamed of themselves for openly supporting such a repugnant human being.It is profoundly disappointing that Republican members of Congress and four holders of Ohio statewide offices silently condone Trump’s unique brand of hate and racism. History will treat only Gov. John Kasich kindly on this issue.

Source: By ‘saying nothing’ on his birther lie, Donald Trump re-embraces the deplorables: Brent Larkin | cleveland.com

Yesterday, members of Congress remembered they are obligated to, like, do stuff, when they narrowly avoided a government shutdown by agreeing to allocate $1.1 billion to fight Zika.Initially, the bill was held up thanks to language that would bar funds from Planned Parenthood, since any effort to boost women’s healthcare is akin to slaughtering schoolchildren on national television. (Note that the actual slaughter of schoolchildren fails to prompt any Congressional action.) But yesterday the Senate approved the bill by a vote of 72-26, and later in the day the House of Representatives approved it 342-85, narrowly averting a shutdown that would leave the government without money to operate Friday at midnight.President Obama, who requested $1.9 billion in Zika funding in February, is expected to sign the bill into law by tomorrow. Though an initial iteration of the legislation prohibited funds from going to Planned Parenthood, that language has since been removed. “Women’s health should never be treated like a political football,” Senator Patty Murray, D-Washington, told NPR. “I am glad that Republicans finally agreed to set aside the extreme provisions that would have specifically blocked Planned Parenthood health care providers from accessing critical funding.”

Alfred Olango, the unarmed black man fatally shot by police in El Cajon Tuesday afternoon, was holding a vape pen, according to a statement issued by the El Cajon Police Department Wednesday evening. Olango was a Ugandan refugee who emigrated to the U.S. at the age of 12 in 1991, according to NBC San Diego. His death has sparked protests in the San Diego suburb.Two police officers had responded to 9-1-1 calls about a man walking in traffic and acting erratically around 2 p.m. on Tuesday. According to NPR, one of the calls was made by Olango’s sister, who said that she told police her brother was mentally ill and unarmed. NBC San Diego reports that police arrived about an hour after Olango’s sister had made the call, and that the shooting happened within two minutes of their arrival.In a YouTube video shot in the immediate aftermath of the shooting, Olango’s sister is seen screaming and weeping as she tells police that her brother was mentally ill, and that she had called for police to help him. “I called for help. I didn’t call you guys to kill him,” she is heard telling the officers.