People could be kicked out for non-payment and locked out until they pay the debt. The Ohio Hospital Association fears higher costs due to administrative complexity. The plan is so problematic that 99 percent of the 956 comments submitted to the state about “Healthy Ohio” opposed key provisions of the proposal.The largest number of comments came from Ohioans worried about their own care: people with rheumatoid arthritis or diabetes, parents with mentally ill or developmentally disabled children. The next largest group of commenters was health-care providers: doctors, dentists, psychologists, hospitals, physician groups and free clinics. Advocates for vulnerable groups – youth in foster care, domestic violence victims, people with breast cancer — submitted comments. The concern of the faith community was enormous. 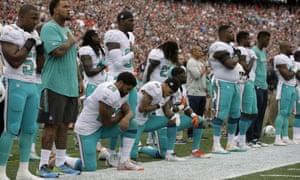 Foster has dismissed criticism of the protests. “They say it’s not the time to do this,” Foster said last week. “When is the time? It’s never the time in somebody else’s eye, because they’ll always feel like it’s good enough. And some people don’t. That’s the beautiful thing about this country. If somebody feels it’s not good enough, they have that right. That’s all we’re doing, exercising that right.”The Dolphins owner Stephen Ross has said he supports his players’ stands. “I don’t think it was any lack of respect. I think everybody here — our team and our whole organization — respects the flag and what it stands for, and the soldiers and everything,” he said. “But these guys are making a conversation of something that’s a very important topic in this country, and I’m 100% supportive of them.”The Broward Sheriff’s Office have made no comment on the union’s requests but Miami-Dade police, who also provide security at Dolphins games, said they had no intention to change their policies. “[The department] have contractual obligations with Hard Rock Stadium to provide public safety. The safety of our residents and visitors is our primary concern,” it said in a statement.

Hooks, approximately 23,000 years old, were made from the shells of sea snails and found in Sakitari cave on island

Researchers believe this and the other findings of their excavation indicates the island has been nearly continuously occupied since 35,000 years ago. As well as the fish-hooks and remains of animals, researchers also found human remains, seashell beads, as well as something they believe might have been a grindstone.

The discovery of the charred remains of the crab is also significant, say the researchers, in that it provides evidence of seasonal eating habits. The size of the crab remains indicate they were captured in the autumn when they were larger and were migrating downstream for reproduction, which is “also the season when they are the most delicious”.