This and bomb in NYC – smells like together and not “outsiders.”

I am no political historian, but as far as I can tell this short essay was the birth of the “Hillary is a Liar” meme. Now to be clear, most conservatives already strongly disliked her. They had been upset with her for some time because she had refused to play the traditional First Lady role. And they were horrified by her attempt to champion Universal Health coverage. But if you look for the actual reasons people didn’t like her back at that time, you won’t see ongoing accusations of her being “crooked” or a “liar”. Instead, the most common opinion seemed to be that she was a self-righteous leftist who considered anyone with other views to be morally inferior. In short, the prevailing anti-Hillary accusation was not that she was unrelentingly dishonest, but that she was just intolerably smug.After the Safire piece however, this all changed. Republicans, who learned from Nixon never to let a good propaganda opportunity pass if they could help it, repeated the accusations of mendacity non-stop to anyone who would broadcast or print them. And if you doubt the staying power of Safire’s piece, type the phrase “congenital liar” into a Google search along with “Hillary Clinton” and see what happens. To this day, that exact phrase is still proudly used by many on the right. This, even though Safire was eventually proven wrong about everything he had written. And despite the fact that he stated himself that he would have to “eat crow” if she were ever cleared, Safire never apologized or even acknowledged his many errors once that happened. Because as we all know, swift-boating means never having to say you’re sorry.

Source: The most thorough, profound and moving defense of Hillary Clinton I have ever seen.

This video shows part of an incident in which an Israeli military sniper severely wounded 22-year-old Palestinian Muhammad al-Amsi during a massive army raid on al-Fawwar refugee camp in the southern West Bank city of Hebron in mid-August.Al-Amsi was standing on his roof talking on the telephone when the sniper shot him four times.It was filmed by Mahmoud Abu Yousef, a videographer with the Ma’an News Agency, and published on Friday by the Israeli human rights group B’Tselem as part of a report into the Israeli raid in which another youth, 19-year-old Muhammad Abu Hashhash, was shot dead by Israeli forces.A separate B’Tselem investigation has found that Abu Hashhash was killed as he posed no danger to anyone.Meanwhile, two Palestinians and a Jordanian citizen – one reportedly 15 years old – were shot dead by Israeli forces on Friday in separate incidents. Another Palestinian was shot dead on Saturday morning. On Thursday, a person died from wounds he received when Israeli forces shot him during a raid on his village. Last week, a Palestinian youth was killed by Israeli forces in Gaza.

Beneath the gilded spires and medieval cobblestone streets of Bruges, the lifeblood of Belgium now flows at more than 1,000 gallons an hour.The turn of a tap on Friday propelled the Belgian city into the future — and sent its citizens to the bar — as dignitaries and drinkers celebrated a momentous innovation: the world’s first beer pipeline.The two-mile pipeline, visible in one spot through a transparent manhole cover cut into the cobblestone, carries beer from one of the country’s oldest still-operating breweries in the center of Bruges to a bottling plant on its outskirts.The project cost about 4 million euros, or $4.5 million. But the brewery discovered an innovative way to raise the funds: promise donors free beer for life.“As far as we know, this is the first time ever that such a thing has been done,” Xavier Vanneste, the director of De Halve Maan, or The Half Moon, a brewery, said in an interview. “It’s an old product, but an innovative project.” 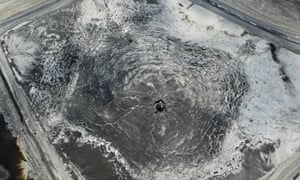 The sinkhole, discovered by a worker on 27 August, is believed to reach down to the Floridan aquifer, the company said in a news release. Aquifers are vast, underground systems of porous rocks that hold water and allow water to move through the holes within the rock.The Floridan aquifer is a major source of drinking water in the state. One of the highest-producing aquifers in the world, it underlies all of Florida and extends into southern Alabama, Georgia, and South Carolina.According to the University of Florida, it’s the principal source of groundwater for much of the state, and the cities of Tallahassee, Jacksonville, Gainesville, Orlando, Daytona Beach, Tampa, and St Petersburg all rely on it. The aquifer also supplies water to thousands of domestic, industrial and irrigation wells throughout the state.Mosaic began diverting the pond water into an alternative holding area to reduce the amount of drainage when the problem was first detected. The company said it had been “recovering the water by pumping through onsite production wells”.“We have an extensive monitoring system,” Jellerson said. “It’s already indicating that it’s recovering the material, but it will take some time for that process to complete.”