Immediately after the attacks, the lifelong New Yorker spoke with a local news anchor who asked whether, given his property in the financial district, he had learned anything about the devastation. Trump’s mind turned to his buildings.“It was an amazing phone call,” Trump replied. “I mean 40 Wall Street actually was the second-tallest building in downtown Manhattan. And it was actually before the World Trade Center was the tallest. And then when they built the World Trade Center it became known as the second tallest. And now it’s the tallest.”Trump later collected a $150,00 grant for 40 Wall Street, from a state recovery program meant to help small businesses after 9/11. In April 2016, he claimed that the funds were “probably a reimbursement for the fact that I allowed people, for many months, to stay in the building, use the building and store things in the building”.Officials who helped with the recovery have disputed Trump’s account to the New York Daily News, and questioned what help the businessman ever provided. But at recent rallies Trump has continued to take credit, saying at one campaign stop: “Everyone who helped clear the rubble, and I was there, and I watched, and I helped a little bit.”

Source: Donald Trump and 9/11: the lies, exaggerations and eye-popping claims | US news | The Guardian

WASHINGTON — Michelle Obama has bridled for years at the confines of life in the White House and has tried to steer clear of the partisan messiness that has consumed her husband and is fueling this year’s bare-knuckled presidential contest.But this week, Mrs. Obama will wade into the campaign fray on behalf of Hillary Clinton, putting her broad popularity and reputation for authenticity to work for a candidate who has suffered from a lack of both.At an event in northern Virginia on Friday, Mrs. Obama will urge voters to register ahead of the state’s Oct. 17 deadline, the first of what aides say will be a series of appearances in the coming weeks in support of Mrs. Clinton.Mrs. Obama’s steps into the campaign spotlight underscore her transformation from a once-reluctant political spouse into a confident public figure, a role she says she has embraced more fully during President Obama’s second term.

Sexual Violence and ‘that night’

Maraz told in court how one night Limber Santos and Vilca went out drinking. Around 5am, Vilca came back to the kiln and into Maraz’s room, where she was sleeping with the children. He woke her and horrifyingly told her ‘your husband owes me a debt, and he gave me you.’ Then he raped her in front of her children.The lead judge, Marcela Alejandra Vissio, described the incident as improbable in her verdict because Maraz did not make a police report.  But not filing a police report for rape is not unusual for women, who face significant barriers in the legal system such as reliving trauma and being victim-blamed. Data on unreported rape is hard to find in Argentina, as in many countries, but it is likely to be far under-reported. On top of the usual barriers, Maraz has the additional barrier of not fully understanding or speaking Spanish.The aftermath of Maraz’s rape included a vicious beating at her husband’s hands. It also sparked violent conflict between Vilca and Santos.On the morning of her husband’s death, 14 November 2010, Maraz got up at 4am to help him prepare for a trip to visit his sister to pay her back a debt. Maraz explained in court that Vilca was also up that morning, drunk. Limber Santos and he started arguing through the window of the room, and then Santos went out. At that moment, Maraz heard the sound of a padlock locking her and the children into the room.The person who removed the lock and came into the room shortly after was not Maraz’s husband, but Vilca. She asked him where her husband was, and Vilca said Limber Santos had left for his sister’s. Then he raped her again, again in the presence of her two children.The Aftermath of Limber Santos’ deathMaraz had no idea that her husband was dead at that moment. When there was no sign of him, she went to stay at her father-in-law’s house with her sons. She testified that she was afraid to stay at the brick kiln because of Vilca’s presence. And she went to the police and reported her husband as missing – she was worried he had been robbed when he didn’t appear at his sister’s.Limber Santos’ body was then found in a rubbish heap on the grounds of the brick kiln. Maraz and Tito Vilca were arrested and jailed as responsible. In jail, Maraz discovered she was pregnant. Her little girl was born in Unit 33 of Prison Los Hornos of Buenos Aires.It took nearly a full year until Maraz was informed of the charges against her in her own language. The Argentine human rights advocacy organization La Comisión Provincial por la Memoria —‘The Provincial Commission for Memory’ — carried out one of its regular prison inspections in Prison Los Hornos and realized that Maraz was unable to communicate well in Spanish. They brought a Quechua speaker to visit her.

Some 800,000 people took part in the Barcelona rally on Sunday, according to police, many of them wearing white T-shirts bearing the word “Ready.”Participants – many draped in blue, red and yellow pro-independence banners – gathered in the city’s Ciutadella park ahead of the demonstration, holding aloft yellow cardboard signs to simulate a beating heart.The event was held on Catalonia’s national day, the “Diada,” which marks the 1714 conquest of Barcelona by Spain’s King Felipe V after a siege that lasted more than a year.Secessionist parties won a clear majority in Catalonia’s regional parliament for the first time ever last year, and approved a plan to achieve independence in mid-2017. However, the plan ran into trouble in June when the winning coalition government lost the support of the small anti-capitalist CUP party, which has a hard line on independence. 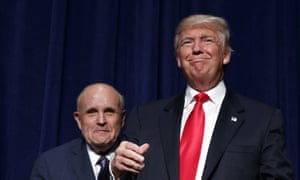 Last month, when a conservative radio host similarly said Trump meant the “founder” remark figuratively – that the Obama administration’s policies had created a vacuum in which Isis grew – Trump replied: “No, I meant that he’s the founder of Isis, I do.”He later said the comment was “sarcastic, but not that sarcastic”.

Source: Giuliani defends Trump idea to take Middle East oil: ‘Anything is legal’ in war | US news | The Guardian