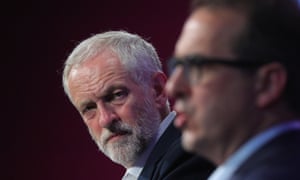 In an interview with the Observer last weekend, Corbyn blamed any failure to get his messages on policy across on mutinous and disloyal MPs and others who had never accepted his leadership. “We have done our best to get our message out,” he said. “It hasn’t been helped that prominent people in the Labour party – Labour MPs – have spent the last 10 months actively being unsupportive of our policies that have been generally agreed and supported. Now everyone agrees that anti-austerity is the right line to be taking.”Corbyn said he was using his second campaign for the leadership in 12 months as a dry run for a general election: “Since the resignations in July and the leadership contest, then clearly the public mind has become focused on the leadership contest rather than the future. I’m trying to turn this leadership campaign into a campaign of how we would run a general election. How we would win back those areas of Britain that have become disillusioned – left-behind Britain.”

Dani Garavelli: Show mercy for suffering of Ebola nurseCafferkey in January 2015 just before her release from the Royal Free Hospital, where the virus nearly killed her. Photograph: Lisa FergusonDANI GARAVELLI23:22Saturday 20 August 20160HAVE YOUR SAYI remember when I first heard the name, Pauline Cafferkey. It wasn’t when she became the first Scottish aid worker to contract Ebola. It was a week earlier – a few days after Christmas 2014 – when Scotland on Sunday published a diary of the vital work she was doing caring for the victims of the virus in Freetown, Sierra Leone.At the time, West Africa was in the grip of the epidemic. Every night, our TV screens were dominated by images of doctors dressed head-to-toe in contamination suits as reporters rattled off terrifying statistics about the spread of the disease.There were few images of those who had contracted Ebola; they were all in isolation. But the tales – of fever, vomiting and internal bleeding – were like something out of a post-apocalyptic movie. “What kind of person would have the courage to go out and help in these circumstances?” we asked ourselves from the comfort of our living rooms.The answer, of course, was someone like Cafferkey: an ordinary woman from South Lanarkshire who was inspired to go into nursing by images of the Ethiopian famine of the 1980s and who – having acquired the requisite skills – was willing to jeopardise her own health to put them to good use.In her diary, she acknowledged the risks she faced. But she focused more on the plight of the victims; her sadness for entire families wiped out by the virus and the air of celebration that greeted each fresh discharge.Since that diary appeared, many terrible things have happened. First, Cafferkey contracted Ebola, hovering for weeks between life and death. Then, 10 months after her supposed recovery, she fell ill with meningitis as a result of the virus persisting in her brain. Four months after that, she was hospitalised again after suffering a second relapse.In interviews, she has talked about some of her long-term symptoms: thyroid problems, joint pains, her hair falling out. And she may never be able to go running again.Alongside her medical problems, however, she has been forced to endure another trauma – one that has been drawn out for far longer than seems fair or necessary: the threat of disciplinary action as the result of complaints passed from Public Health England (PHE) to the Nursing and Midwifery Council (NMC).Last week, 20 months since she first became ill, the NMC finally outlined the case against her. It claims Cafferkey deliberately tried to conceal a temperature higher than 38 degrees during a screening in Heathrow Airport. She is also accused of failing to inform medical staff that she had taken paracetamol, which lowers temperatures.If the hearing, to be held in Edinburgh next month, finds against her, she could be struck off. In the meantime, she is being abused on social media by trolls who have accused her of “turbo virtue-signalling” and of exposing other people on the connecting flight she boarded from Heathrow to Glasgow to unnecessary risk.Of course, I have not seen the evidence that will be put in front of the hearing. But you do have to wonder at the wisdom of pursuing a woman who has already suffered so much for what was – even if true (and the allegations may well be false) – a misjudgment made in extremis.I imagine months of dealing with death in the African heat plays havoc with both body and mind (in her diary Cafferkey talks about the way the oral hydration salts made her vomit). And I imagine aid workers – exposed every day to Ebola – frequently overreacted to minor symptoms; that they fretted every time they coughed or sneezed, and were consumed by the possibility the virus was already working its way through their bodies.How easy would it be to convince yourself that a slightly inflated temperature was another over-reaction – a projection of your worst fears, especially when you were so close to home?Admittedly, Cafferkey’s flight from London to Glasgow could have been catastrophic (although Ebola is spread by bodily fluids and there is no suggestion she was vomiting). Those on board had to be contacted and checked, a process which must have been inconvenient and scary for all. But no-one did contract the virus during that flight.Surely there ought to be a balance between the need to enforce the rules and an acknowledgment of the nurse’s contribution to society. After all, not only did Cafferkey save lives, she provided scientists with vital information about the way the disease behaved; by studying her medical history, they learned more about the recurrence of the disease in survivors and how to treat it.At the very least, any investigation that had to be held should have been swiftly resolved not dragged out over a year and a half. She has already spoken of the additional stress the protracted inquiry has caused her. And – let’s be blunt – t