Allyson Felix and Tori Bowie powered the defending champions past the Jamaicans, who won silver.

As deadly yellow fever spreads to seven provinces of the Democratic Republic of Congo (DRC), new measures have been introduced to ensure that as many people as possible are immunised, despite global shortages of the yellow fever vaccine. Global emergency stocks of just 6 million yellow fever vaccines have been strained by the current outbreak, which began in Angola and has now spread to neighbouring DRC. To reach as many people as possible with the limited supply 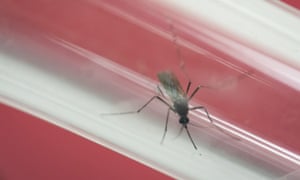 Puerto Rico has reported its first death from a paralysis condition that developed from a Zika infection as the US territory fights an epidemic of the mosquito-borne virus.The victim was a man between 35 and 45 years old from the San Juan metro area who died from Guillain-Barré, according to state epidemiologist Brenda Rivera. The condition can cause temporary paralysis and, in rare instances, death.Rivera noted that it was unusual for the victim to be so young.“What does this tell us? That all of us are susceptible,” Rivera said as she urged Puerto Ricans to protect themselves from the virus.The man, who died last month, was obese but did not have any other health conditions, she said. No further details about the victim were provided.The US territory has a total of 13,186 confirmed Zika cases, with a total of 102 hospitalizations and 34 cases of Guillain-Barré. The number of Zika cases is believed to be much higher because eight of 10 people have no symptoms and many do not go to the doctor. Those infected include 1,106 pregnant women, which is a concern because Zika has been linked to severe birth defects.“We are not going to see the effects of Zika today,” Rivera said. “We are going to see them in the next couple of months, in the next several years.”

I don’t even know if a humiliation mode of politics, in a fractured America, serves any purpose other than self-satisfaction and smug liberalism, at the expense of meaningful dialogue and grassroots change. But even if you were to disagree on that, there are so many better ways to publicly deride Trump than to throw the people progressives claim to protect under the bus, in the name of a tasteless political joke.

http://www.nytimes.com/2016/08/20/science/5-zika-cases-were-transmitted-in-miami-beach-florida-governor-says.html?smprod=nytcore-iphone&smid=nytcore-iphone-share and so it goes – while Congress goes on vacation 🤒