A report by Jeré Longman for The New York Times. One o’clock arrived. Relatives gathered at a hotel bar to watch Olympic gymnastics on television. So did the first lady of Belize and 11 contestants in the coming Miss Belize pageant, wearing their sashes and carrying tiny flags. But where was Simone Biles? The women’s individual […]

via Simone Biles Soars, Lifting Belize With Her — Repeating Islands

Puerto Rican tennis player Mónica Puig has defied all expectations to win her semi-final match against Czech player Petra Kvitovà to move to the Rio Games ‘women’s singles final match. Mónica, ranked 34 in the world, beat 14th-ranked Kvitovà in three sets (6-4, 1-6, 6-4) to move on to the final. She is guaranteed at […]

Faces paint the midnight aura Colors light the evening sky Watching over land and sea Satellites go zipping by Galaxies become as one Constellations come to life Visions watching over us Beguiling, mesmerizing, rife The universe above, as one Beneath, the Earth divisible Lessons learned become undone As the skies become invisible ©2016 Dorinda […]

Do you know Bartley’s All In Wood? Lacey-Ann Bartley is a highly focused, determined, hands-on young Jamaican entrepreneur with a clear vision for her company – and for her country. She’s innovative and ambitious, and is now seeking funding to expand her business and employ more young men in the rural community where she works. I […]

The 20-year-old swimmer from Sugar Land, Tex., is the first African-American woman to win an individual event in Olympic swimming. 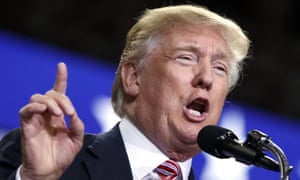 What Trump had done was violate a core American ideal: the notion – not always honoured, admittedly – that no matter where your family came from, if you were born in the US or had come there and subscribed to its founding principles, then you were as American as a direct descendant of those who landed on Plymouth Rock. This was what set the US apart, the belief that national identity did not reside in blood or soil, but in loyalty to the nation’s constitution and its bill of rights.Or consider Trump’s proposal to ban Muslims from entering the US; it was again attacked by Republicans as well as Democrats because it contradicts America’s founding purpose, to be a haven from religious persecution, a purpose encapsulated in the constitution’s first amendment guaranteeing the “free exercise” of religion. Or reflect on Trump’s little joke this week, suggesting the way to deal with Clinton might be a bullet – at odds with America’s professed determination to resolve its differences through a constitution, the law and elections.The common thread is that all these moves by Trump are not just reactionary or bigoted or dangerous. They contradict the ideals that all Americans are meant to regard as sacred. Perhaps this is the way to attack Trump: as truly un-American. He says he wants to make America great again. The truth is, he would stop America being America.More comment TopicsDonald Trump US constitution and civil liberties Republicans DemocratsShare on LinkedIn Share on Google+ Save for laterReuse this contentAdvertisementMost popular in USHope Solo calls Sweden ‘a bunch of cowards’ after USA falter at Olympics Rio Olympics 2016: women’s football, tennis, athletics and basketball – live! San Jose Mercury News says sorry for ‘insensitive’ Simone Manuel headline Donald Trump: it’s all a joke Have we detected an alien megastructure in space? Keep an open mind | Seth Shostak

Source: Donald Trump’s achilles heel is that he is truly un-American | Jonathan Freedland | Opinion | The Guardian

All states prosecute parents whose children come to severe harm through neglect. But in 34 states (as well as the District of Columbia, Guam and Puerto Rico), there are exemptions in the civil child abuse statutes when medical treatment for a child conflicts with the religious beliefs of parents, according to data collected by the U.S. Department of Health and Human Services.Additionally, some states have religious exemptions to criminal child abuse and neglect statutes, including at least six that have exemptions to manslaughter laws.These exemptions recently drew renewed attention in Idaho when, in May, a state task force released a report stating that five children there had died unnecessarily in 2013 because their parents, for religious reasons, had refused medical treatment for them. The report has prompted some of Idaho’s legislators to begin pushing for a repeal of state laws that protected the parents of these children from civil and criminal liability when they refuse to seek medical treatment for religious reasons.

Children are not their parent’s property; they are our future!

We’re on the ground in Rio covering the 2016 Summer Olympics. Check out all our coverage here.So far in these Olympics, the 19-year-old freestyle swimming sensation Katie Ledecky has won four medals for the U.S., three of them gold, and shattered the 400-meter world record in stunning fashion. She has just one event left in these games, and it’s the one that rocketed her to prominence in 2012: the 800-meter freestyle. She swam a leisurely 8:12.86 in her qualifying heat on Thursday, which is both an Olympic record and faster than any other woman has ever swum this distance. A repeat swim in the final would assure her a gold medal.Ledecky’s world record in this event — set somewhat unexpectedly at the Arena Pro Swim Series in January in Austin — is 8:06.68. Even before these Olympics began, people have started to wonder whether she might — someday — be able to achieve the unthinkable:”Is 8 minutes achievable in your lifetime?” “I don’t know, I’m getting pretty close” –@katieledecky