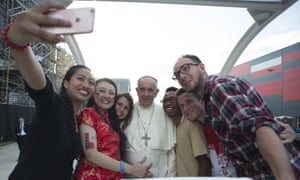 For many people it is easier and better to have drowsy and dull kids who confuse happiness with a sofa,” he told an estimated one million people gathered at a vigil in a vast plain near Kraków.“Dear young people, we didn’t come into the world to vegetate … We came for another reason: to leave a mark,” he said.“The times we live in do not call for young couch potatoes but for young people with shoes, or better, boots laced.”Francis, 79, said being constantly glued to screens – where the terrible events of the world become just another story on the evening news – numbed youngsters to the suffering of others.

Source: Pope Francis tells ‘drowsy and dull’ children to get off the sofa | World news | The Guardian

Trump’s actual response, though, wasn’t fine.”If you look at his wife, she was standing there,” he said, on national television. “She had nothing to say. She probably, maybe she wasn’t allowed to have anything to say. You tell me.”This wasn’t a slip of the tongue. In an interview with Maureen Dowd, Trump took the same tack. “I’d like to hear his wife say something,” he said.Let’s be very clear about what Trump is doing here: as ABC wrote, he’s suggesting “Khan’s wife didn’t speak because she was forbidden to as a Muslim.” This is bullshit. It is flatly, verifiably, false. But that’s almost beside the point.Trump listened to a speech by the bereaved father of a fallen Muslim soldier and used it to slander the fallen soldier’s family. That was his response. That is his character.At this point, I honestly don’t know what to say. I don’t have new language for this, I haven’t found another way of saying this isn’t okay, this isn’t kind, this isn’t decent. Instead, I’ll note James Fallows’s response. He quotes Joseph Welch, speaking to Senator Joseph McCarthy in 1954.”Until this moment,” he said, “I think I never really gauged your cruelty.”If you would like to see Ghazala Khan speak, you can do so in this interview she gave to MSNBC’s Lawrence O’Donnell. As Fallows writes, she breaks down sobbing while speaking of her son. It suggests she let her husband give the DNC speech for a simple reason: she remains overwhelmed by grief.This is the woman Trump decided to slander. This is the gauge of his cruelty.This isn’t partisan. This isn’t left vs. right. Mitt Romney never would have said this. John McCain never would have said this. George W. Bush never would have said this. John Kerry never would have said this. This is what I mean when I write that the 2016 election isn’t simply Democrat vs. Republican, but normal vs. abnormal.Trump also wanted the Khans to know that, like them, he had sacrificed for this country.”I’ve made a lot of sacrifices,” Trump said. “I work very, very hard. I’ve created thousands and thousands of jobs, tens of thousands of jobs, built great structures. I’ve had tremendous success. I think I’ve done a lot.”I honestly do not understand how a human being can respond to a family that lost their son for this country by saying that he has sacrificed too, he’s worked really hard, he’s built “great structures,” he’s had “tremendous success.”This is not a question that needs to be asked in most elections, but it needs to be asked in this one: what kind of person is Donald Trump? What kind of person says these things? And is that really the kind of person we want to be president?