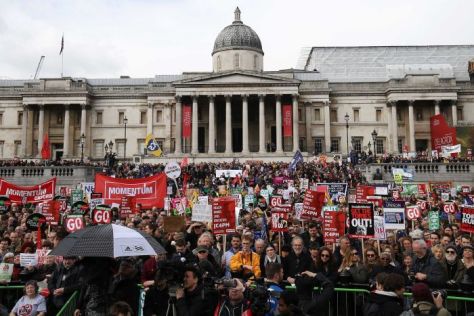 Tens of thousands of people march through London in protest against government spending cuts, with some activists demanding Prime Minister David Cameron’s resignation over his family’s offshore finances.

Fugitive US intelligence contractor Edward Snowden, who in 2013 revealed widespread US foreign surveillance, has released a song with French electronic artist Jean-Michel Jarre, the Columbia record company announced on Friday.

The track, titled “Exit”, features Snowden discussing digital surveillance to the backdrop of a lively electronic soundscape created by Jarre.

The song is available to stream online and will appear on Jarre’s forthcoming album “Electronica Vol. 2: The Heart of Noise” which will be released on May 6th.

The pair were brought together by Britain’s Guardian newspaper after Jarre gave an interview and asked to be put in touch with the former National Security Agency contractor, according to the title.

“Edward is an absolute hero of our times. When I first read about him, it made me think of my mother,” Jarre told the Guardian.

“She joined the French resistance in 1941, when people in France still thought they were just troublemakers, and she always told me that when society is generating things you can’t stand, you have to stand up against it.”

After being put in touch, Jarre, 67, travelled to Moscow to meet Snowden, 32, who lives in Russia in exile, and record the samples that feature on the track.

Other guest contributors on the album will include Gary Numan and the Pet Shop Boys.

– “When they wish us ‘Happy Women’s Day,’ they also take the liberty to define womanhood in the process. The radical nature of the movement – protests and struggles being led by dalit-bahujan women and working class women – is ignored. This reinforces caste and class divisions in society, rather than breaking them.”

– “Speaking of Working Women’s Day – what do we understand by the word ‘working’? There are women who don’t get a salary. But we can’t say, under any circumstances, that they’re not ‘working.’ Their workplace may not be a factory or an office, but it is certainly the 24×7 grind of home. Are we excluding them from our conversations?”

– “I came to know about Women’s Day when I was a teenager, around twelve or thirteen years old. I saw something about it on the glossy paper of the Lifestyle section: there it was, written in pink, ‘Happy Women’s Day.’ Next to this there was a picture of a smiling, thin, light-skinned girl dressed in a red saree. This narrow way in which society wants to see womanhood is constantly asserted so that this day can be corporatised.”

– “A few years ago, some boys wished me ‘Happy Women’s Day’ and this made me feel good, because I felt that I was being accepted as a woman. My mother too is a woman, but this day means nothing to her. We can’t truly celebrate this day if we don’t feel free as women. I don’t.”

Source: I Am More Than Just My Trauma: Life As Victims Of War Crime In Croatia. | Rebelle Society

In Snježana’s case, her assailants’ criminal court proceedings were delayed by 12 years, and once they were finally incarcerated, they were released from jail awaiting their trial after only 1 week. One of them sold his home and fled to neighboring Serbia. The second one, a policeman, was let go due to a lack of evidence. He was suspended from his job only after she publicly accused him of the rape, but he continued to receive his salary. He, too, eventually fled Croatia. Both rapists were charged with a 6-year prison term, yet neither man served any of his sentence. Snježana is relieved that they fled the country, and thinks that this is better than having to live in fear of their release. Even so, the family of one of the perpetrators still lives in her hometown. In the past, her assailant’s family members would threaten her and her husband when they crossed paths in town. 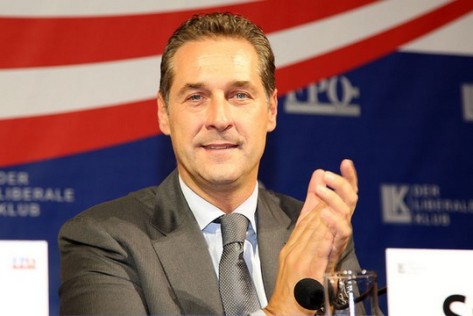 The ties Likud is trying to build with extremist right-wing groups in Europe is an attempt to find common ground over both’s hatred for Islam. This way, Europe’s racist right wing is no longer considered anti-Semitic, while the Israeli Right gets more support for settlement building and the violence against Palestinians in the West Bank and Gaza. Likud, whose members often do not hesitate to label President Barack Obama an “anti-Semite,” does not think twice before it grants legitimacy to a racist political party. This is an alliance of hatred, which mocks the very idea of Israel’s war against global anti-Semitism. Unfortunately, Jewish-Israeli nationalism, as we have seen, did not shy from forming rotten alliances with the most deplorable groups. It continues to do so today. Noam Rotem is an Israeli activist, high-tech executive and author of the blog o139.org, subtitled “Godwin doesn’t live here any more.”

1) Thou shall believe that “they” are the “Chosen” 2) If you see their numbers extremely over-represented in high positions of power and control thou shall not mention, except if it was to praise their “superior” IQ 3) If you become aware that they are “running the show” in the media thou shall only […]

Virgin Islands’ author, educator, feminist and activist Gloria I. Joseph, Ph.D., will bring the celebration of National Poetry Month to an impressive close with the St. Croix launch of her remarkable bio/anthology that reflects the tenacious life of Caribbean-American, black feminist and poet laureate Audre Lorde, the St. Croix Source reports. The St. Croix book […]

Award winning Jamaican actress and singer Dianne Dixon has joined a stellar line-up of actors from across the Caribbean for the Braata Productions Caribbean Playreading Series to be held at the Jamaica Performing Arts Center (JPAC) in Queens, New York, from April 22 – 24–Jamaica’s Star reports. The Caribbean Playreading series is designed to create, […]

I have spent my life settling. Told to not make waves, not speak up. Be a good girl. good girls go along, make do, compromise and do for others.  And if you are a good enough girl one day some day someone will care for you, will love you, will listen to you.   You have […]