And because doubling down is something Trump is good at, he further encouraged the violent rhetoric with a tweet threat directed at Bernie Sanders this morning (see below). Speaking to CNN’s Jake Tapper on “State of the Union,” he denied it was a threat, and instead deployed double-speak to argue that he “should get credit, not be scorned” for how he’s handled these “disruptions” from his enemies. In response to all that, Sanders told Tapper that his campaign “had nothing to do” with what happened in Chicago. “Even his Republican colleagues make this point: His language, his intonation, when he talks about carrying people out in stretchers…this is a man who keeps implying violence, and then you end up getting what you seek,” he said. 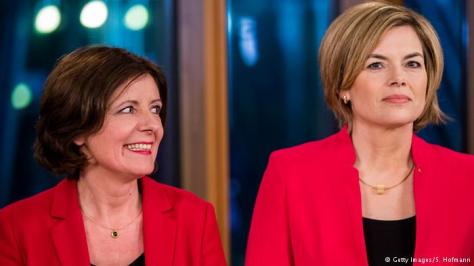 In a huge blow to Angela Merkel’s CDU, the SPD has won 36.4 percent of the vote in Rhineland-Palatinate. Despite the continuity in the state minister’s office, the AfD has entered parliament for the first time.

The German Council on Foreign Relations (DGAP) is one of the institutions that, for some time, have been systematically researching real or alleged Russian influence in Germany and the EU. Already in September, the think tank had published an analysis, wherein it proposed that Russian media activities in the West, e.g. “Russia Today” or “Sputnik” be counteracted with a reinforcement of western programs in the East, such as the government financed “Deutsche Welle’s” Russian-language programs.[1] The struggle for influence must be systematically approached and the “analysis of the developments in Russia and the other post-Soviet countries,” comprehensively intensified. Recently a wide-ranging research was made on both Moscow’s policy and its sphere of influence during the cold war. According to the DGAP, “national research must be reinforced” in the study of the Soviet Union’s successor states, not only by think tanks, but even “at universities.” For this, a better “pan-EU … coordination of the various research institutions” is needed. The DGAP leaves no doubt that it is on the lookout for all sorts of channels of Russian influence. Not least among its objectives is the disclosure of Russia’s networks, its financial flows and its economic relations within the EU.”[2]

Johns Hopkins University School of Medicine biophysicists recently found that the bacteria causing tuberculosis (TB) may be naturally resistant to antibiotics, called fluoroquinolones, which could help researchers strengthen TB drugs that have weakened over time. The biophysicists made this discovery using maps that showed 3-D details of the structure of the drugs while the medicines interacted with TB’s essential enzyme. “Front-line treatments for TB are eroding rapidly as more cases of multidrug-resistant TB arise worldwide,” Dr. James Berger, professor of biophysics and biophysical chemistry, said. “Our work helps show that we need not — and indeed should not — give up on fluoroquinolones, a longtime weapon in the fight against disease-causing bacteria in general. We’ve helped to identify several promising possibilities for developing new versions of these drugs that might even work against extensively drug-resistant TB.” The maps also showed the reason that some of the TB drugs are stronger while others are weaker. This could help scientists develop fluoroquinolones that are more efficient against the mutating disease “This result means the fluoroquinolones aren’t working in the most straightforward way, and that’s a challenge for drug developers,” Berger said. “We have to rethink the chemistry of these drugs, but doing so will likely open up new avenues for improvements.” The study is available in the Proceedings of the National Academy of Sciences.