Israeli Occupation Forces (IOF) on Tuesday overnight have kidnapped iconic activist against the Wall and settlements, and mother of six, Manal Tamimi (43) from her home in Al-Nabi Saleh village near Ramallah. On the International Women’s Day, 8th of March, at 1:30 AM, dozens of soldiers stormed Manal’s home, raided it and detained her family in one room, while female Israeli soldiers have taken Manal to another room in the house, thoroughly inspected her, then kidnapped her. Manal’s husband, Bilal Tamimi (50) said that a few hours after the arrest, the family knew that Manal was taken to Benyamin Israeli police center near Ramallah, calling it “the Israeli gift to the Palestinian women on women’s day.” Manal’s lawyer, Gabi Lasky, said that Tamimi went through investigation at the police center, and has asked for a hearing session to take place as soon as possible to know the charges held against her. 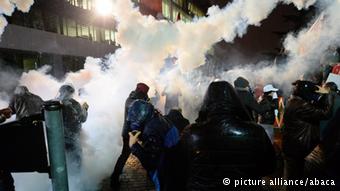 For Dundar, Turkey’s government is leading the country down a road that leads ever further toward authoritarian rule. The European Union, he says, is easing the way. Watch video01:34 Black

“The attitude and stance of Europe is a great concern,” Dundar said. “The refugee crisis is clearly very serious but I’m afraid the EU is accepting Turkey’s abuses of basic rights and press crackdowns because of it – they are engaged quite comfortably in dirty bargaining on this.” “Europe should not be surrendering its fundamental values and condoning abuses of human rights in Turkey because of the refugee crisis.” Now, Dundar is recuperating ahead of his trial. Perhaps fittingly, it will be a closed hearing. Asked whether, in light of the state takeover of Zaman, he fears for the future of his newspaper Dundar responded: “Nothing would be a surprise anymore, but somehow I don’t think so. For me, however, Erdogan will do his best to put me away.”

Fear and Loathing Spreads Faster than the Flu!

Forty-eight percent of Israeli Jews strongly agreed or agreed to the statement “Arabs should be expelled or transferred from Israel,” the poll released on Tuesday by the non-partisan Washington-based Pew Research Center found.

Men sentenced to death in the brutal killing of Farkhunda, a young woman who was an Islamic scholar, had their sentences cut to as little as 10 years.

Source: Lebanon’s Is The 8th Worst Country In The World For Women Rights

But as if there is a curse following the Palestinian being, she sent me an hour later a photo with her new residency written on it: “A Jordanian refugee in Israel”. She tried at the beginning or rationalize with them saying that this was wrong. She is not a Jordanian refugee in Israel. They insisted she was. She was trying to explain to them that she was Jerusalemite. She tried or explains her status and they insisted she was lying and that she was a refugee. Somehow, apparently, together with the crisis of refugees she was a cause of threat as an assumed refugee. Actually a confirmed refugee after that new residency that gave the employee a reason to panic and consider her a potential threat, to a level where she forced her to leave, and when my daughter refused insisting that this was a mistake, they called the police or get her out. The woman was telling her: You are a liar. You are a refugee. This is not even a passport that you are carrying “. My daughter called me crying, trying to get out the whole feeling of humiliation she got experienced being dragged out of a place by the police in front of people watching her in what felt like a public humiliation act. She was questioning something else: “ Am I a Jordanian refugee?” the whole thing made her question her own identity. What she knows as basic rights. All those laws that define her special status as a person living under occupation with a special status. A status that the international law, with a country likes France that secures the status quo of Jerusalem that secures the status of Jerusalemites. While we spend our lives carrying a nationality that is not ours. Living in our country as “immigrants”, moving around with a document that is not a passport that calls on a state of panic each time we check through borders. And then an employee who decided to carry on the Zionist vision of Israel with Jerusalem as the unified capital with the no dignified, some day extinct people, also forces us on new definitions. Did this woman decide a law? Or was it her own idea? This is a question that the French government should answer .

Source: Being Jerusalemite : A Jordanian Refugee in Israel | nadiaharhash

Noted China lover/hater Donald Trump is finding himself at the center of yet another controversy after it was revealed yesterday that a new 50-story luxury rental complex in Jersey City with his name on it is being made great with the help of millionaire Chinese investor/immigrants. Bloomberg reports that Trump Bay Street, currently being built by a company owned by Trump’s son-in-law Jared Kushner, is financed by tens of millions of dollars from a controversial program that provides big foreign investors with US visas and a path to residence. The EB-5 visa program calls for an investor to provide a minimum of $500,000 before he is granted a two-year visa, along with a chance at permanent residency in the US for himself and his family. Each year, the program attracts about 10,000 foreign millionaires to the US — 85% of them Chinese. It has recently come under criticism for its rather loose vetting process that doesn’t require applicants to submit proof of education, work qualifications or even the source of their money. While Trump Bay Street has his name on it and is being built by his son-in-law, it’s unclear how closely Trump is working on the project. The tower is yet another case of Trump, who labels himself as the “BEST builder,” merely selling his trusted last name to a project, while his assistant says that he has no hand in managing its finances.

The daily elements of oppression must be so grating at times that the fuse must be lit over the smallest indignity – arrrgh!

I found myself forced to do this horroble missio of going to the ministry of interior in Jerusalem . Ofcourse it is in east jerusalem . When it comes to services east and west part as well as terminology becomes vital. The unification term becomes a pure fragmentation , segregation And humiliation . I was cursing my daughter for making me go through this from the early morning hours. I was faced by a long line that reached the beginning of the gate of this ghetto . Taking into consideration we are celebrating women’s day; I couldn’t miss out thr do many messages that were around. Veiled women. Crowds of women.more veils in all ages and styles . Stirring women. Pushing women. Screaming women. Disabled women. All women trying to push Inside to speed the entrance to a ghetto like compound controlled by two screaming in Hebrew soldiers to the…