Know history or repeat it 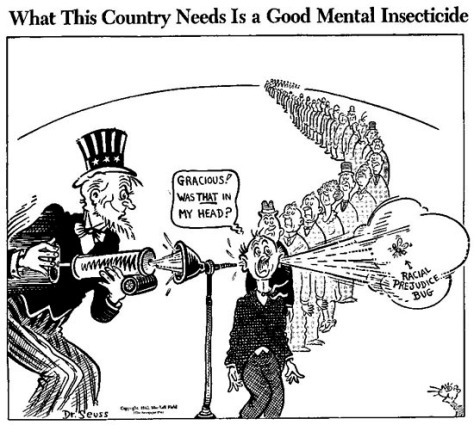 Learning from our past history,  America could use a good dose of mental insecticide to vanish the racism and vitriol that has been infecting our country recently. 1942 Political cartoon by Theodor Geisel – Dr. Seuss, from NY newspaper PM.

We need to be on high alert

The threat is real.

We need to be vigilant not only about extremist terrorists who wish to do us harm, but about the ramped up stereotyping and creeping xenophobia that is growing, thanks to the red white and blue home-grown extremists like Donald Trump whose vile comments cloaked as patriotism are becoming numbingly familiar.

Both threats are real…both are dangerous…both pose a grave danger to American freedom.

Against a boosterish backdrop of cheering crowds, Trump announced his plan to make America great Again by banning all Muslim’s from entering our country, beaming at what he saw…