Despite this hostile atmosphere, this courageously 14-year-old girl, took the microphone, to explain what it is like to be a Native student in a school with a racist mascot. She bravely told them about harassment, despite her voice shaking. When speaking about the killing of Native men, women, and children, and the selling of their scalps (known as r*dskins), she became emotional and had to stop for a moment to compose herself. Because of this pause, her time ran out, but she tried to conclude her thought, just as the many of adults who spoke prior to her had.However, adults in the crowd began shouting at her, just as they had us, prior. She courageously told them “I’m almost finished”, to which someone in the crowd shouted “Get off the stage, squ*w!” Understandably upset at being called the worst vulgarity that can be directed towards a Native women, she expressed her disgust at the barbaric behavior and returned to her seat, as the crowd yelled “Go, R*dskins!” at her.So, yes, she did become emotional and stormed off, for which she personally apologized to each board member. However, as a Native women, I think that her response showed a great deal of restraint and grace, considering the verbal assault that she had just been subjected to. That the board would tolerate such verbal violence in their presence, and still characterize keeping the very mascot that embodies and encourages such racism as an “ethical” choice, gives me grave concerns for the safety and welfare of Native children in their district.You see, the emotional pleas from mascot supporters who tearfully said “it’s more than a mascot” are absolutely correct. It is more than a mascot. It is evidence of a much deeper problem that continues to divide our communities, and plague our future generations. When towns like McLoud, and many others, are presented evidence of the harms, yet take the stand that “this is who we are”, embracing the racism and accepting the resulting victimization of members of their community, the impact is not limited to only their closed minded communities. We all have to interact in this world with the generations who are reared in that environment. Racism and division hurt us all.

Source: Community on Racist Mascot: “This is Who We Are”

“Somebody entered the US through the K-1 visa program and proceeded to carry out an act of terrorism on American soil. That program is at a minimum worth a very close look,”‘ White House spokesman Josh Earnest said on Thursday.The United States issued around 35,000 fiance/fiancee visas in 2014 and slightly fewer in 2013. Among those who slipped into the country through the normal vetting process was Pakistani terrorist Tashfeen Malik. 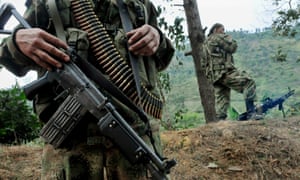 Montealegre said there was evidence that Farc fighters used forced abortions to avoid losing female fighters “as an instrument of war”. In the past the Farc has denied forcing women and girls to undergo abortions and said contraception is provided to female fighters in their ranks.Spanish police said that according to Colombian authorities, victims of “The Nurse” had been raped by Farc fighters and included at least 50 underage girls. Some were forced to abort in the late stages of pregnancy.Most of the abortions were carried out between 1998 and 2000, the police added.

But last week he questioned Trump’s judgment at a private fundraiser, according to the New York Times, after the billionaire businessman advocated temporarily banning Muslims from entering the United States.That got Trump’s attention.”I don’t think he is qualified to be president,” Trump said on “Fox News Sunday.””I don’t think he has the right temperament. I don’t think he’s got the right judgment. When you look at the way he has dealt with the Senate, where he goes in there like a, you know, frankly, like a little bit of a maniac – you are never going to get things done that way.”Trump touted his ability to get along with liberals and conservatives and said that was the hallmark of the “world-class businessman” he is.The front-runner, whose comments on Muslims drew widespread criticism but may not dent his lead in several national public opinion polls, made a sarcastic reference to Cruz’s respectful treatment of him.”He’s been so nice to me. I mean I could be saying anything and he’d say, I agree I agree,” Trump said on CNN’s “State of the Union.”On the Fox program, he also criticized Cruz for talking about him behind his back.Cruz rose to 31 percent, above Trump’s 21 percent, in an Iowa poll released on Saturday by the Des Moines Register and Bloomberg News. That’s a 21-point jump from October.His rise came at the expense of retired neurosurgeon Ben Carson, who dropped to third with 13 percent in the poll, while U.S. Senator Marco Rubio hovered at 10 percent. Jeb Bush was at 6 percent, a 1 percent increase from October.Rubio, who has seen an uptick in his own poll standings in recent weeks, criticized his Senate colleague on defense spending, saying Cruz talked about carpet-bombing Islamic State while voting to cut the military budget.Rubio was measured in his criticism of Trump on NBC’s “Meet the Press,” saying, “There’s a lot we have a difference of opinion on, but we can’t ignore that he’s touched on some issues that people are concerned about.”Trump made the same point on Sunday, saying Americans are living in fear of being attacked. He linked his proposal to ban Muslims temporarily to his tough-on-immigration ideas, which included building a wall at the border with Mexico.”One of the reasons I’m sitting here and one of the reasons I’m so high in the polls is because it all started with the borders,” Trump told CNN. “I took much more heat when I said illegal immigration and southern borders and the wall and all of that than I ever took for this.”

The latest in a spate of violent harassment against SoCal’s Muslim-American community. [ more › ] Around 300 protesters gathered Sunday in the city of Szekesfehervar where a life-size bronze statue of Balint Homan is slated to be unveiled at the end of the month.Homan was a civic leader and academic widely seen as an architect of anti-Jewish laws in the 1930s. He also called for the deportation of Jews from Hungary in 1944, while part of a fascist Hungarian government propped up by Nazi Germany.The prospect of paying tribute to Homan with a statue has led to widespread outcry inside Hungary and among international diplomats.”An openly anti-Semitic, fascist politician should never get a statue anywhere in this country,” Andras Heisler, head of Hungary’s largest Jewish group, the Federation of Jewish Hungarian Communities (Mazsihisz), told the crowd at the protest

Saudi voters elected 20 women for local government seats, according to results released on Sunday, a day after women voted and ran in elections for the first time in the country’s history.

At least 19 Saudi women have won seats on local municipal councils a day after women voted and ran in elections for the first time in the country’s history, according to initial results released to The Associated Press on Sunday.