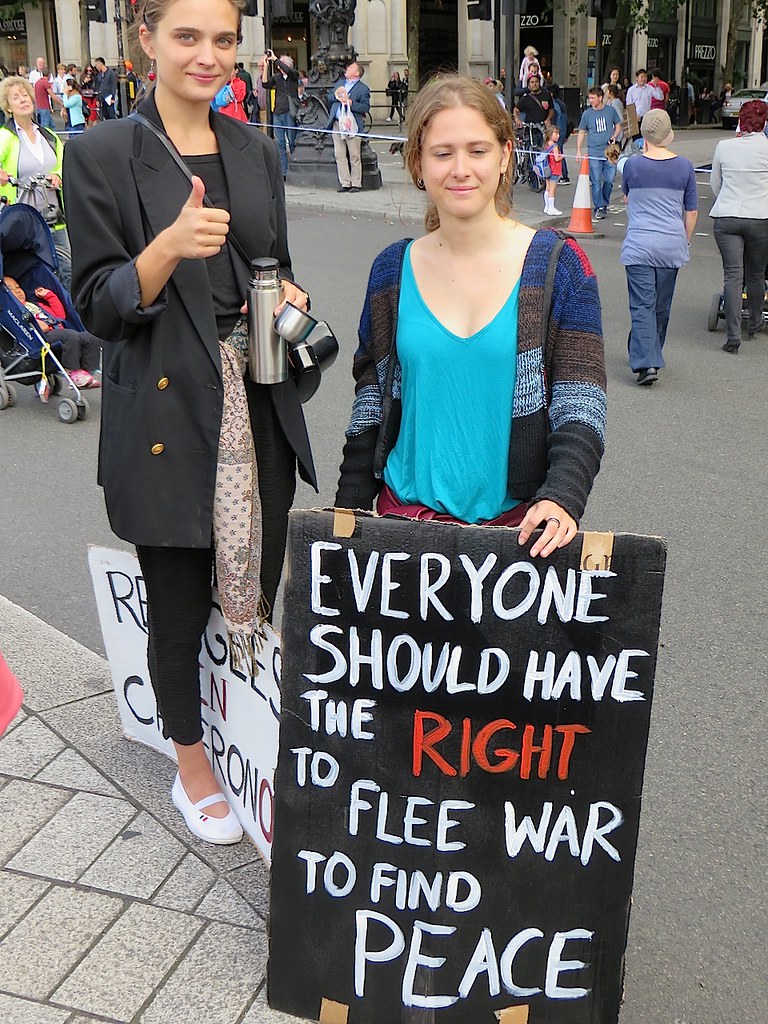 I took this photo at the refugee march in central London on 12th September 2015 — ‘Solidarity with Refugees’ aka ‘Refugees Welcome Here,’ organised by groups and organisations including the Syria Solidarity Movement, the Refugee Council, Refugee Action, Amnesty International, Stand Up to Racism, the People’s Assembly Against Austerity and the Stop the War Coalition.
Today was a great day for the millions of us who want to see a better world, and are fed up with the existing power structure — the election, by a landslide, of Jeremy Corbyn as the new Labour Party leader, and the march in central London, which was attended by around 100,000 people in solidarity with the refugees fleeing Syria and other countries in numbers not seen since the Second World War.
The existing power structure presides over a hard-hearted and increasingly unequal vision of the UK, in which the rich get richer, the poor get poorer, austerity is cynically used by the Tories to try and destroy the state provision of almost all services, and the refugee crisis is sidelined — and all this by a government that, although it has provided significant financial aid, is only accepting 20,000 refugees, over five years and on a temporary basis, and is now gunning for war, which will only create more refugees, and trying to justify that through the disturbing extrajudicial execution of two British citizens in Syria via an RAF-led drone attack.
For the refugee march, see: http://on.fb.me/1PDRYF6
and: http://on.fb.me/1NZP6Fi
For my article about the refugee crisis, see: http://bitly.com/1NZP6Fk…
For my website, see: http://bitly.com/1PDRYF8
For my most interesting photos, see: http://bitly.com/1PDS1AM…