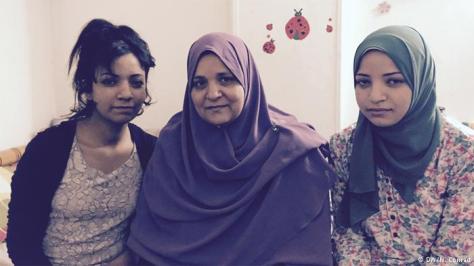 When Esraa disappeared without a trace, Duaa Mahfouz El-Taweel said she immediately knew what to do: The next day, she ripped off all the photos decorating her elder sister’s bedroom walls. Three weeks later, Duaa, a softly-spoken 22 year-old student, reached for her mobile phone and scrolled through her pictures. She pointed to a grainy, slightly skewed shot showing several colorful collages of her sister smiling into the camera, laughing and hugging friends. Today, only a few shreds of blue-tack remain stuck to the walls.

Sitting on her sister’s bed in a small flat in a lower class neighborhood in Cairo, the many cuddly toys Esraa loved so much lined up neatly beside her, Duaa shrugged. “Everyone knows you have to do that.”

It was, she said, the normal thing to do once a relative or friend went missing: “We try to hide as much stuff as possible that tells you what kind of a person this really is.” Otherwise, she added matter-of-factly, the intelligence services might decide to abduct anyone else shown in the photos. Three of her close friends and about a dozen of her acquaintances had been detained in recent months and she was taking no risks. Powel Kazanjian, a professor of history and infectious diseases at the University of Michigan.

In a new paper, Kazanjian suggests that an Ebola virus may have been the culprit in the Plague of Athens, a five-year epidemic that began in 430 B.C., whose cause has long been a matter of conjecture. Not only was the famed historian Thucydides, who chronicled the Peloponnesian War between Athens and Sparta, a witness to the Athenian disease, he also contracted it himself and survived.

via Was Ebola the culprit in the ancient Plague of Athens? – The Washington Post.