7 Months After: investigative journalists talk about the Ayotzinapa Case 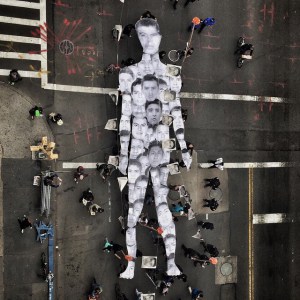 Graphic for Caravana43 in New York City by JR

Seven months after the attack on Ayotzinapa students, I remembered that unspeakable crime by attending a talk at my local branch library (Temescal) in Oakland. For several hours last Saturday, Anabel Hernández and Steve Fisher talked about their work as investigative journalists. Both are postgraduate fellows at the University of California Berkeley’s School of Journalism in the Investigative Reporting Program. [1] They are currently investigating the Ayotzinapa Case and have written several articles for the Mexican weeklyProceso.