Ted Cruz had a response for the President’s State of the Union address. There were two problems.

The first problem is that the video was uploaded unedited. It showed Ted Cruz taking a second take. His “Let me start over” comment showed a senator with an affinity for acting. The video was subsequently pulled from YouTube.

The second and most important issue was the content of the video. It fell flat. It fell flat because Ted Cruz seemed to be living in an alternate state of reality. He attempted to turn the recovery in jobs into a loser by stating that participation rates are down. He fails to tell Americans that as the baby boomers age, that is a likely occurrence.

via Ted Cruz did not want you to see this (VIDEO).

What if you could make your own commercial for the stuff you wanted to sell online? The DIME is an app created by Latinos that does exactly that. The app allows smartphone users to create their own commercials for cars, apartments, jobs, roommates, puppies, tickets or anything else you want to sell or buy online.

We were lucky enough to nab an interview with Isaac Cuchilla, CEO of The DIME. The 26 year-old LA native is Nicaraguan and Salvadoran and found himself working with technology early in in elementary school; later when he became interested in journalism and worked at La Opinión, he found a way to fuse these two interests.

via LA Startup The DIME is the Video Version of Craigslist | Latina Lista: News from the Latino perspective.

Days after what looked like the end of its use of topless models on Page 3 sparked celebrations among campaigners, Thursday’s Sun seems to have reverted to type.

In what appears to be an attempt to regain control of the narrative surrounding the future of the newspaper’s Page 3, the paper again features a photograph of a topless model, which appears under a “Clarifications and Corrections” header and comes after a front-page panel announces: “We’ve had a mammary lapse.”

But others who have long regarded the 44-year-old practice as sexist, offensive and anachronistic were dismayed by the move.

via The Sun brings back topless women days after apparent end of Page 3 | Media | The Guardian. 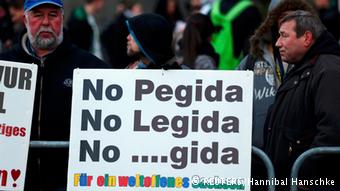 LEGIDA’s rally got underway on Wednesday evening with the organizers hoping to attract tens of thousands of supporters, although many faced difficulty reaching their destination.

According to the DPA news agency, only a fraction of the anticipated number had reached the Augustusplatz – the city’s largest square – by early evening. Counter-demonstrators blocked the way in surrounding streets, chanting the refrain “Get lost!” and brandishing signs reading “No PEGIDA, No LEGIDA.”