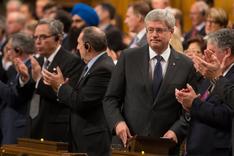 It’s right wingnut politics in both cases – trying to look tough on security and race without seeming racist as both are!

Now, Canada is one of only two developed countries to issue a visa ban for people from Ebola-stricken West Africa — a wrong-headed decision that is xenophobic, bad science, and against international law.

Following Australia, the federal government’s department of citizenship and immigration announced last week that it would no longer grant travel visas to Canada for residents and citizens of Ebola-affected countries, including Guinea, Sierra Leone, and Liberia. It’s also halting the residency applications of folks from these countries. The restrictions don’t actually apply to Canadian travelers — but only to West Africans themselves.

One thought on “Canada’s Ebola visa ban is dumb, xenophobic, and illegal – Vox”