Witnesses say that Stafford first got out to check on the elderly man: “I saw the driver get out of the car and go to pick up the man, who had to be in his 80s,” witness Lili Skorpanic, who works nearby, told the Post. “He was wearing this gray business suit, so I figured he was a gentlemen, a professional, who would know what to do. But he just panicked and ran off.”

He allegedly tried to flee the scene in his 2005 BMW, but three other motorists gave chase and were able to stop and hold him. “It’s like the whole neighborhood got together and followed him,” Skorpanic told them.

The elderly man, whose name hasn’t been released, was taken to Elmhurst Hospital in stable condition. Stafford has now been charged with leaving the scene of an accident, operating a motor vehicle under the influence of drugs and aggravated unlicensed operation of a motor vehicle for the crash. He has at least two prior arrests, including one for drunk driving.

Each week, in immigration courts across the United States, hundreds of children, some as young as just a few months old, come before immigration judges and are called upon to defend themselves against deportation. Among them is Arturo,* a three year old who arrived at the United States border in April 2014 because family members feared for his life in El Salvador. Although he is only a toddler, the government has put him (named in our lawsuit as “A.E.G.E.”) into deportation proceedings on his own. He has no attorney to help him explain to the court why he should not be deported.

Canadian soldier was killed and the nation’s Parliament was on lockdown Wednesday after gunfire rang out in downtown Ottawa.

A hospital said it had received three victims, two of whom were in stable condition.

Details were sketchy, but police said several shooters were believed to be involved.

At least one gunman opened fire on a soldier who was standing guard at the National War Memorial, then headed in the direction of the nearby Parliament building, witnesses told the Canadian Broadcasting Corp.

The soldier was given emergency aid at the scene and put in an ambulance. Police later confirmed that a member of the Canadian forces had died of his injuries.

Moments later, shots were fired inside Parliament, according to journalists and lawmakers inside the building who saw a body lying motionless on the floor that they presumed to be a suspect. Some reported that the sergeant-at-arms of the House of Commons had shot the assailant.

via One Canadian soldier killed as shots ring out in nation’s capital – LA Times.

1.5 million deaths a year – yet we follow the media lead and run for cover from ebola hype. Ebola and and should be stopped but taking years to stop new types of TB is insane!

“The death toll from this disease is unacceptably high,” the report read. “A staggering number of lives are being lost to a curable disease.”
Last year, there were 9 million new reported cases of tuberculosis, with 1.5 million of those being fatal.
The number of cases, however, continues to decrease: “TB is slowly declining each year and it is estimated that 37 million lives were saved between 2000 and 2013 through effective diagnosis and treatment.”
The trend indicated that one of the Millennium Development Goals – established by a UN panel in 2000 – to reverse TB infection rates could be achieved by the deadline.
“The 2015 Millennium Development Goal of halting and reversing TB incidence has been achieved globally, in all six WHO regions and in most of the 22 high TB-burden countries,” the report stated.
Multidrug-resistant TB alarming
Multidrug-resistant TB remains alarming – high cost prevented many people from getting proper diagnoses and treatment.
“There are severe epidemics in some regions, particularly in Eastern Europe and Central Asia,” the report read, adding that for people infected with this strain, rates for successful treatment were “surprisingly low.”
Grania Brigden, a TB expert with the charity Medecins Sans Frontieres, said, as reported by the Reuters news agency, that the “alarming spread of drug-resistant TB from person to person in the former Soviet Union is of critical concern, along with the growth in MDR-TB and XDR-TB cases,” she said, referring to multidrug-resistant (MDR) and extensively drug-resistant (XDR) strains of the disease.
“Access to proper treatment is drastically low: Only 1 in 5 people with multidrug-resistant TB receives treatment; the rest are left to die, increasing the risk to their families and communities and fueling the epidemic,” she said in a statement. 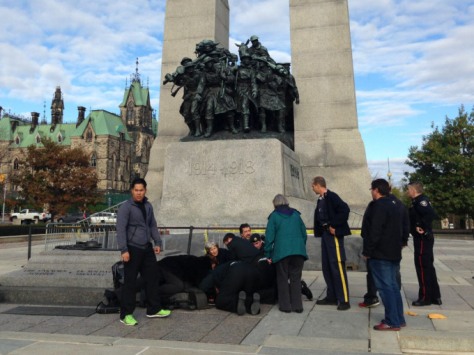 Responders administer CPR to a Canadian soldier shot at the Cenotaph in Ottawa. (Wayne Cuddington/Ottawa Citizen)

via Photos: Shooting on Parliament Hill in Ottawa | canada.com.

However, the MSF Foya Project Coordinator told President Sirleaf that when the French medial charity arrived in Lofa in August, there were more than 125 patients, but cases have stabilized and at a low level. For the past several weeks, the ETU in Foya where all Ebola cases from surrounding districts are transferred for treatment has had an average of “more or less than ten patients”, Mr. Louis said.

In the last 26 days, he reported that they did not have any confirmed case in Foya, Vahun and Kolahun districts, respectively, while attributing the success in Lofa to efficient and effective coordination among all actors involved in combating the outbreak; efficient, regular assistance with ambulances for Foya District and surrounding districts; and the establishment of the ETU for three districts in addition to effective health promotion.

“But the frontline of this response has been the health workers and national staff. And while we’re seeing result at the moment, we must praise that in the continuation of this response will be only efficient, will be possible if staff are fairly and adequately compensated in the timely manner,” he suggested.

And world media and conspiracy nuts going on and on about controllable Ebola as if the end of world was coming!

Nadar called on parents to make their children see the need to always wash their hands and maintain safe hygiene at all times as this would reduce deaths caused by diarrhea by almost 50 per cent.

Nadar, said: “In Nigeria every year, we have about 150,000 children that die largely due to diarrhea mostly associated with unsafe water sanitation and hygiene.