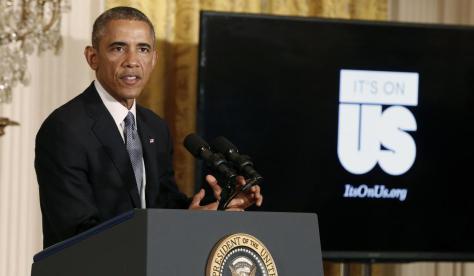 “Identify situations in which sexual assault may occur.

If you see something, intervene in any way you can.

If something looks like a bad situation, it probably is.

Get someone to help if you see something.

Get in the way by creating a distraction.”

The White House’s flashy new bystander intervention campaign, It’s On Us, makes sexual assault sound a lot like a bad thunderstorm — unfortunate, inevitable, striking seemingly out of nowhere, and devoid of human agents. The solution, then, is easy and comfortable: “Identify situations in which [a-tornado-I-mean-sexual-assault] may occur” and guide your friend to safety; remember: “If something looks like a bad situation, it probably is.”

Gender-based violence is not like the weather. It has direct, immediate human agents and is structural and systemic at its core. But the new campaign de-politicizes and de-genders sexual assault, portraying it as an easy-to-avoid problem solely between individuals, and making perpetrators out to be vague “someones” who do “something” to other “someones.” In reality, perpetrators are disproportionately likely to be men and their victims are disproportionately likely to be women (particularly queer and trans women, women of color, and women with disabilities), queer men, and gender non-conforming folks.

The It’s On Us campaign’s failure to conceptualize of violence as systemic and structural guts meaningful responses to it. While bystander intervention more broadly may be usefully integrated into a more comprehensive anti-violence approach, it has serious limitations. And the way it’s framed in It’s On Us, it offers a strategy to avoid violence, not meaningfully reduce it. The campaign’s tips — like guiding your friends away from perpetrators at parties — might help an individual woman avoid a rapist in an individual instance but it won’t stop that rapist from turning to the next girl down the bar. It makes the problem seem discrete and manageable, with a quick fix that fits comfortably within an existing structure of how our world works, who has power, and who doesn’t. It enlists men, for instance, to protect their female friends at a bar but not to recognize their own power and privilege, the subtle ways in which they enact violence all the time. 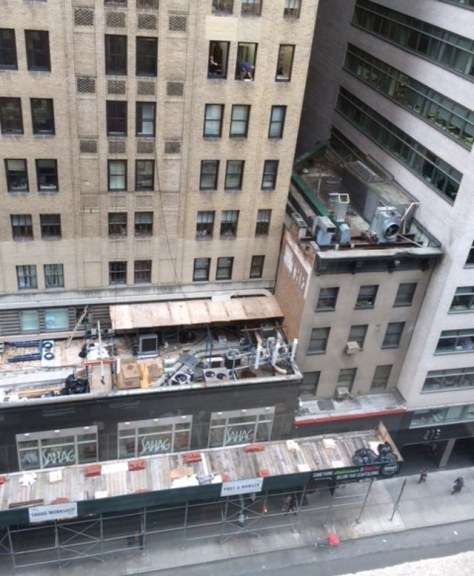 Tipster “angelmay1978” sent us photos this morning of a man she describes as a “Daredevil Caulker,” observed in the building across the street from her. “He’s on the 10th floor standing/squatting on the window sill caulking the outside of the window frame…no harness,” our witness reports, noting the building in question is located at Madison Avenue and 49th Street. “I’m about to have a panic attack,” she adds.

Yes, this definitely seems dangerous, but the caulker’s courageous work this day will be remembered in that office for generations. Fortune favors the bold.

via Photos: Fearless “Daredevil Caulker” Risks It All For The Love Of Caulk: Gothamist.

While the news continues to run good out of Nigeria and Senegal, where earlier introductions of the Ebola virus appear to have been successfully contained, today’s report shows a jump of over 500 cases since last Thursday’s report from Sierra Leone, Liberia, and Guinea.

I have seen all types of friends but I never found a friend better than safeguarding the tongue.

I have seen all types of clothes but I never found clothes better than Allah -consciousness.

I have seen all types of wealth but I never found wealth better than contentment.

I have seen all types of good deeds but I never found a good deed better than giving good advice.

And I have seen all types of food and I never found food more delicious than patience. 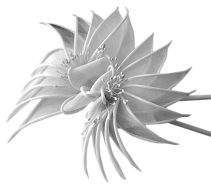 “The Sunnis in Anbar and other provinces are facing oppression and discrimination by the government,” said Mohamed el-Bajjari, a tribal sheikh and spokesman for a coalition of tribes. “This government must be changed to form a technocratic government of nonsectarian secular people, or the battles and the anger of the Sunni people will continue.”

This article by Seth Galinsky appeared in The Militant.
The revolutionary government of Cuba is sending a 165-member medical team to Sierra Leone to combat the outbreak of Ebola in West Africa. This is the largest number of medical personnel being sent to West Africa from anywhere in the world.
Like other internationalist aid from Cuba since working people took power following the 1959 revolution, the mission to combat Ebola “is carried out under the principle that we don’t give what we have left over; we share what we have,” Cuba’s Public Health Minister Roberto Morales said at a Sept. 12 press conference in Geneva.

Morales said that Cuba currently has 50,731 volunteer health care workers in 66 countries, 4,000 of them in Africa. About 20 percent of Cuba’s 75,000 doctors are currently engaged in volunteer internationalist missions.

“Now it seems it’s the crackpots at the top of the Tory Party too.” This is *news*?

The biggest supporters of an English parliament used to be the far-right skinheads of the neo-nazi British National Party and the equally crackpot English Democrats.

Here’s a quote taken from a BNP leaflet called ‘The Need For An English Parliament‘:

And here’s how crackpot the English Democrats are:

Could this be the worst party political broadcast ever?

But now some Tories – such as Tory MP Graham Brady – are openly calling for exactly the same policy as the BNP and the English Democrats.

Brady’s no outcast. He’s chair of the powerful Tory 1922 Committee. And Cameron has invited Brady to Chequers to discuss the idea of an English parliament with him tomorrow.