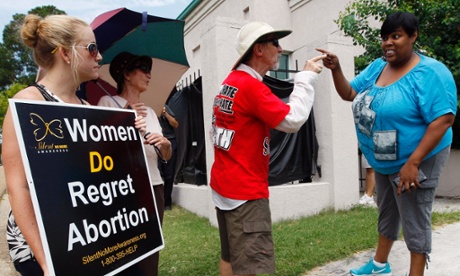 Imagine trying to walk into a building, trying to get a medical treatment – and someone screams at you. Someone is two inches from your face – two feet from the front door – and that someone is videotaping you, calling you a whore. There’s ketchup poured in the snowbanks around you, made to look like spurted blood. You try to take a step forward, but people block your way, yelling that you’re going to be “mother to a dead baby”. They hold signs in your faces, whisper “murderer” in your ear as you pass. Maybe they shove you.

Don’t believe portrayals to the contrary – from anti-choice activists and the news media – that these kinds of protestors outside abortion clinics are not grandmas praying, or kindly “counselors” who just want to talk reasonably to women. These people wait outside clinics to shame and to harass; they are there to scare.

via The US supreme court’s abortion buffer zone ruling protects a gauntlet of horror | Jessica Valenti | Commentisfree | The Guardian. 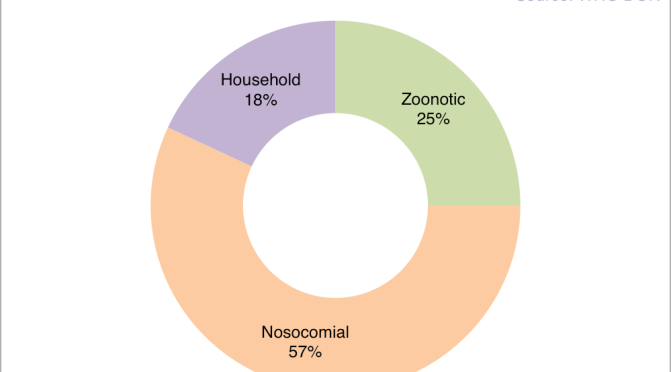 The WHO released a DON shedding a little bit of light on the 113 previously unreported KSA MERS cases this morning. Though we still don’t have access to case-by-case data, it’s much better than nothing!

One VERY important detail – apparently, only 34 of the 113 previously unreported KSA MERS cases ended in death… But when the 113 cases were first announced a few weeks ago, 92 previously unreported deaths were announced as well. What this means is that there are 58 deaths that remain unaccounted – and that they most likely occurred in cases that were previously reported. Unfortunately, that leaves us with a really significant margin of error when it comes to comparing pre/post-outbreak case-fatality… And throws the simulations I posted a while back out the window. Thankfully, I’m working with David Fisman, Caitlin Rivers, Ashleigh Tuite, & Eric Lofgren on a study right…

The Speaker of the House of Representatives is going to sue Obama over his executive orders:

While Boehner has yet to announce the details of the forthcoming lawsuit, House Republicans have strongly opposed numerous unilateral decisions made by the Obama Administration, including halting deportations of immigrants who were brought to the country as children, postponing provisions of the Affordable Care Act and raising the minimum wage for federal contractors. In a letter to House members Wednesday, Boehner said he intends to bring legislation to the floor in July to “compel” Obama to follow his oath of office.

White House Press Secretary Josh Earnest didn’t say whether Obama and Boehner had discussed the lawsuit when the Speaker was at the White House Tuesday, and he criticized House Republicans for taking their opposition of the President into “a gear that I didn’t know previously existed.”

Arlene Laing is a pioneer when it comes to Jamaican websites. She created the first Jamaican website online in 1994. X Murphy interviews Laing for Jamaicans.com, founded in 1995 and inspired by her pioneering work. Here are excerpts (with a link to the full interview below):

Tell us what drove you to create the very first Jamaican website on the Internet?  I have been on the Internet, since 1989.  At first, I used email to keep in touch with my brother, a computer scientist in Jamaica who was among the first to have email back then, fellow students, professors, and friends around the world.  Prior to the “World Wide Web”, I had used “gopher” to browse the Internet and “USENET” to connect with the Caribbean diaspora. Then in early 1994, a friend showed me Mosaic, one of the first web browsers, and I immediately realized that the Web was… 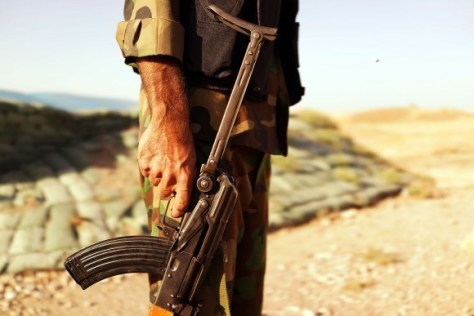 The “Simplification” Of The Issues « The Dish.

What Osma bin Laden wanted, it seems to me, was to bait the West into a direct fight on Muslim soil. That immediately elevated the cause of jihad, internationalized it, galvanized a generation of religious fanatics, and, even better for the radicals, broke a country in the heart of the Middle East so that sectarian violence could be exploited for further radicalization. Obama’s great achievement has been to steer the US, so far as possible, away from taking that poisoned bait. Cheney’s achievement was to fall for it, hook, line and sinker.  I say this as someone who also took the bait – with good intentions and in good faith, but blinded by trauma and ignorance. The choice we face is really between those two long-term strategies for surviving the Islamist wave. I favor Obama’s. I favor the future over the past.

“What Osma bin Laden wanted, it seems to me, was to bait the West into a direct fight on Muslim soil. That immediately elevated the cause of jihad, internationalized it, galvanized a generation of religious fanatics, and, even better for the radicals, broke a country in the heart of the Middle East so that sectarian violence could be exploited for further radicalization. Obama’s great achievement has been to steer the US, so far as possible, away from taking that poisoned bait. Cheney’s achievement was to fall for it, hook, line and sinker. I say this as someone who also took the bait – with good intentions and in good faith, but blinded by trauma and ignorance. The choice we face is really between those two long-term strategies for surviving the Islamist wave. I favor Obama’s. I favor the future over the past.” 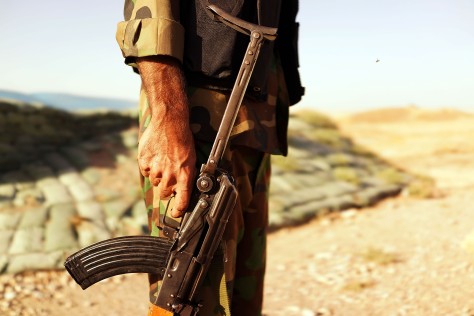 Every now and then, a blast of cold sanity greets the world. At least that was my reaction reading Tom Ricks respond to the idea that if Obama had somehow been able to leave 10,000 troops in Iraq, all would now be well. Au contraire:

That’s nonsense. If we had the force there, what we’d be doing now is facing this question: Do we retreat ignominiously and get the troops out of the country, or do we use them in a way—or do we find ourselves forced to use them—in a way we don’t want to, supporting Maliki without reservation? Or do they just sit there inside their camp gates and everybody mocks the Americans for doing nothing? So I think by not having troops on the ground there it greatly simplified the issues for the United States and actually gave the United States more…

This sense of safety hasn’t always been the norm for employees and patients of reproductive health care providers in Massachusetts. Prior to the buffer zone law, some protestors would dress up like Boston Police Department officers to deceive patients into providing their contact information. Some protestors would intentionally block the entrance to the door or stand in front of cars entering the garage. There were cases of protestors photographing or throwing literature inside of patients’ or employees’ cars. Most tragically of all, two employees were murdered at neighboring health centers in Brookline in 1994.

Part of my responsibilities as Planned Parenthood League of Massachusetts’ Counseling and Referral Supervisor included overseeing the 60 volunteers who staffed our hotline, some of whom had been volunteering for Planned Parenthood since before I was born. I was often reminded by our volunteers of how lucky I was to have only known the health center after the buffer zone law was passed. When I trained new volunteers, many asked if I felt safe at the health center, and I would explain how the buffer zone worked. They were relieved to know that they would have a safe, clear path to the door every day.

Today, the Supreme Court struck down the Massachusetts buffer zone law that made me, my coworkers, and the patients feel safe and protected. It is incredibly disheartening to learn that my former coworkers and their patients won’t be protected by the same 35-feet that kept me safe. I trust that the staff at Planned Parenthood will continue to do whatever they can to help protect their patients and provide excellent, non-judgmental care, and encourage you to follow them online (find the Planned Parenthood Advocacy Fund on Facebook and Twitter) for ways to action to replace the buffer zone law.

A small detail adds some context:

Two Iraqi advisers to Mr. Maliki said there would be more than 1,000 American private security guards coming to Iraq to protect the 300 military and intelligence advisers that will be here to help the Iraqi government fight ISIS, far more Americans than previously acknowledged. One adviser said the number of private guards would reach 1,700.

And the beat goes on.

Bugaighis was shot in the head Wednesday night, just hours after casting her ballot in Libya’s parliament elections, the state news agency LANA reported. She was rushed to a hospital where she died of her wounds, it said.

Earlier in the day, she had been speaking by phone from her home on a Libyan TV channel about fighting raging near her neighborhood, sparked when militants attacked army troops that had been deploying to protest polling station.

“These are people who want to foil elections,” she told Al-Nabaa network as rattling gunfire interrupted her call. ” Benghazi has been always defiant, and always will be despite the pain and fear. It will succeed.”

In the evening, five gunmen broke into her home, the house’s guard told police, according to the Al-Wasat newspaper. They first asked about her son Wael, then shot the guard in the leg, then broke into the house. The guard said that he heard gunfire from inside.

Bugaighis’s husband, who is a member of the Benghazi municipal council and was also at home at the time, has disappeared since the attack, the paper and other Libyan media said.

Bugaighis had only just come to Benghazi from the capital, Tripoli, especially to cast her ballot in the election, a family friend Hanaa Mohammad told Libya Ahrar TV. She had fled with her family some time back to Jordan because of death threats against them.