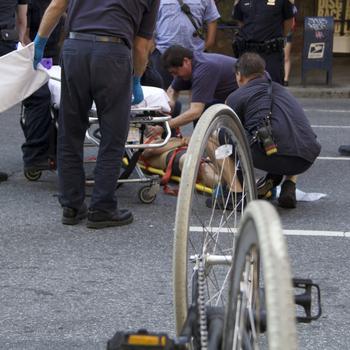 Here is today’s disturbing reminder to always be very, very careful when riding your bike, driving your car, or walking your legs, particularly in Midtown. A cyclist was hit by the driver of a cab on 57th Street and 9th Avenue around 4 p.m. yesterday, sending him to the hospital.

According to FDNY, the victim was taken to New York Hospital in stable condition. Officials were unable to provide additional details on the events that led to the crash, but the cab’s smashed windshield suggests the cyclist was hit with enough force to have been flung onto the hood of the vehicle. The driver remained on the scene. 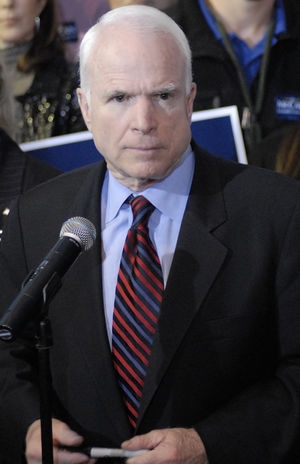 While McCain notes that he objected to an earlier proposal that would have called for releasing the very same high value terrorists as an act of “confidence building” with the Taliban, he clearly states that he would support the release of these people if the prize were to be the American soldier being held by the Taliban. He later modifies his response to say that if the exchange were for one of these terrorists—whom he told us just this past Sunday were people responsible for the deaths of thousands—he would support the deal.

Does anyone out there believe that the critics would have been silenced if the exchange had only involved one terrorist…or two…or three? If you believe that our policy of not negotiating with terrorists is the correct policy, does negotiating for the release of one high ranking terrorist make it better? Yet, there is Mr. McCain voicing his support for a deal that , just three months later, he would go on TV to condemn.

I don’t think anything more need be said except that we should all be embarrassed and deeply concerned that this man continues to hold such an important position in our government.

via John McCain Position Switch On Bergdahl Deal-Is He The Most Disingenuous Member Of Senate Or Simply Unfit To Serve?.

The typically baseless claims of these candidates range from demonizing propaganda about certain minority groups to the promotion of fantastic conspiracy theories about the federal government’s allegedly evil machinations. What follows are snapshots of a dozen such candidates, including Democrats, Republicans, Libertarians, independents and others who are running for political office this fall or who ran earlier in the year.

She may be best known in the public eye for the iconic picture that shows her cradling Malcolm X’s head in her lap after he was killed in a Manhattan auditorium, but Yuri Kochiyama’s life and legacy stood for much more, especially to Asian Americans. Many of us learned of Yuri Kochiyama’s recent death, not from mainstream news outlets, which have yet to do her legacy full justice, but from one another. And we have had very similar collective responses: tremendous gratitude for how she influenced us, coupled with a redoubling of our commitment to the principles she lived by.

via Growing Up To Be Like Yuri Kochiyama | Race Files.

Seismographs recorded 31 quakes in the same area south of Gardiner on Saturday, while another 23 were reported last Wednesday and Thursday in an area between 18 and 19 miles east-southeast of West Yellowstone.

Oarfish Mystery: Why Are They Washing Ashore?: LAist.

According to traditional Japanese lore, the Daily Telegraph wrote in 2010, the fish rise to the surface and beach themselves to warn of an impending quake.

Shortly before the 2011 Tohoku earthquake and tsunami, about 20 oarfish stranded themselves on Japanese beaches, suggesting the fish could possibly have known that the temblor was coming, Mark Benfield, a researcher at Louisiana State University who’s remotely videotaped the mysterious creature, he told Live Science earlier this year. Or of course, as he added, it could just be a coincidence.

However, Japanese folkore has long connected the two. “In ancient times Japanese people believed that fish warned of coming earthquakes, particularly catfish,” Hiroshi Tajihi, deputy director of the Kobe Earthquake Centre, told the Daily Telegraph. He dismissed the connection as “older superstitions,” saying, “there is no scientific relationship between these sightings and an earthquake.”

Earlier this year, sea lions were beaching themselves in record numbers along California beaches, which experts speculated might be due to a lack of food fish.

A rare 15-foot Stejneger’s beaked whale washed ashore in Venice Beach on October 15, but no one knows whether that’s related to the oarfish strandings.

So, either we’re all doomed or it’s just been a banner week for weird fish photo ops.

A Voice For Men’s homepage currently links to a change.org petition demanding that society “class feminism as a terrorist group.”

A Voice for Men has said that it welcomes “peaceful” protests of their conference, which makes sense. As a philosophy, Men’s Rights depends on the conviction that men and men’s rights activists are the most persecuted people on the planet. Protesters — not to mention fundraising for a security detail — helps to sell that idea.

via A Men’s Rights Group Crowdfunded $25,000 for Extra Security Because of ‘Bullies’ – The Wire.

In 1985, while Iran and Iraq were at war, Iran made a secret request to buy weapons from the United States. McFarlane sought Reagan’s approval, in spite of the embargo against selling arms to Iran. McFarlane explained that the sale of arms would not only improve U.S. relations with Iran, but might in turn lead to improved relations with Lebanon, increasing U.S. influence in the troubled Middle East. Reagan was driven by a different obsession. He had become frustrated at his inability to secure the release of the seven American hostages being held by Iranian terrorists in Lebanon. As president, Reagan felt that “he had the duty to bring those Americans home,” and he convinced himself that he was not negotiating with terrorists. While shipping arms to Iran violated the embargo, dealing with terrorists violated Reagan’s campaign promise never to do so. Reagan had always been admired for his honesty.

Reagan during the Iran-Contra Affair

The arms-for-hostages proposal divided the administration. Longtime policy adversaries Secretary of Defense Caspar Weinberger and Secretary of State George Shultz opposed the deal, but Reagan, McFarlane and CIA director William Casey supported it. With the backing of the president, the plan progressed. By the time the sales were discovered, more than 1,500 missiles had been shipped to Iran. Three hostages had been released, only to be replaced with three more, in what Secretary of State George Shultz called “a hostage bazaar.”

When the Lebanese newspaper “Al-Shiraa” printed an exposé on the clandestine activities in November 1986, Reagan went on television and vehemently denied that any such operation had occurred. He retracted the statement a week later, insisting that the sale of weapons had not been an arms-for-hostages deal.

Maggie and Molly – you were the best.