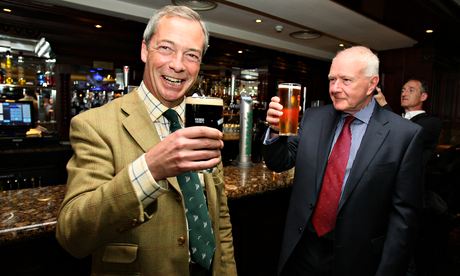 Nigel Farage continues to insist that we should be worried if Romanians move in next door (Farage remarks branded racist by three senior Labour figures, 20 May), while YouGov finds that 51% of Ukip voters think immigrants and their families (including those born here) should be encouraged to leave Britain. This merely confirms what was already obvious, yet apparently needs to be spelled out: Ukip is a party that spreads and feeds off racism and xenophobia.

For many years the rightwing tabloids have waged a campaign of hysteria about asylum and immigration, while both main political parties have either contributed or pandered to an increasingly fact-free discourse based on the prejudiced assumption that foreigners are a burden on society. The emboldening of Ukip’s bigoted populism is just one of the entirely predictable consequences of this trend.

The class represented by Ukip’s millionaire backers and personified by its leader – a public-school-educated former City trader and professional politician – has a vested interest in diverting social and economic anxieties away from the rich and powerful and towards our friends and neighbours.

Glad my dad and his dad left Oldham in 1913 and that they are both gone now – so they would not have to be ashamed of racism in Oldham.

According to UKIP’s deputy leader Paul Nuttall, Oldham is the “birthplace of UKIP”.

Very appropriate then that Oldham UKIP has just been reported to the police for a shockingly racist election leaflet it’s been distributing.

The leaflet includes this paragraph which explains how Labour candidates supposedly keep winning in Oldham:

Here’s the full story from the Manchester Evening News:

And here’s the offending election leaflet in full, if you can stomach reading it: 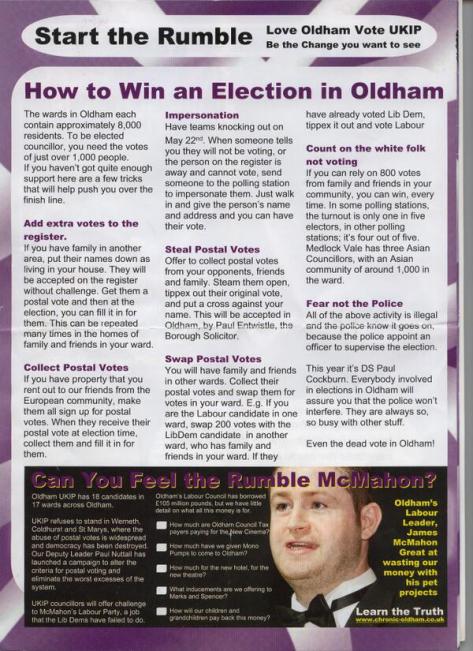 Ironic that in the leaflet UKIP complains the police won’t interfere in elections.

Because they are now.

Nigel Farage and the man who trashed the pound. Twice.

Our thanks to Thomas Spear for bringing this information to our attention.

Follow this link for an illuminating 12-minute video by Peter Sonnenberg:

For the original report go to http://www.dw.de/cloud-of-xenophobia-grows-in-dominican-republic/a-17642660

At a cocktail party before an election rally in Marseille on Tuesday evening, days before the European elections in which the FN is leading the polls in France, Le Pen spoke of the “demographic explosion” in the world.

“Monseigneur Ebola could sort that out in three months,” he said in front of journalists.

“In our country and in all Europe, we have known a cataclysmic phenomenon – a migratory invasion that, my friends, we are seeing only the beginning of today.”

Le Pen, who is standing as MEP for the south-east seat, added: “This massive immigration risks producing a real replacement of populations if we don’t arrive in power soon enough to put an end to the politics of decadence that has been followed for decades.”

S.peaking in Marseille, which elected an FN mayor in one of its districts in recent elections, Le Pen was followed on stage by his daughter, party president Marine.

Once again, her father undermined her campaign to convince voters the FN has evolved from its days as a vehicle for the extreme right and Nazi apologists.

A correspondent for Germany’s Der Spiegel magazine has been forced to temporarily leave Turkey after he received thousands of death threats over his article on the country’s worst mining disaster.

“I was not withdrawn” by the magazine, Hasnain Kazim, the Istanbul-based correspondent, told AFP in an emailed statement on Wednesday.

“I am just spending a few days somewhere else to be on the safe side. In a few days I will be back in Istanbul and continue to do my work,” he said.

In his article, Kazim quoted a miner from the western town of Soma saying, “Go to hell, Erdogan,” in a show of anger at Prime Minister Recep Tayyip Erdogan’s response to the mining disaster that claimed 301 lives.

Kazim said he has received over 10,000 threats via e-mail, Facebook and Twitter, adding that a few hundreds of them were death threats.

“Get out of my country you filthy pig,” one Twitter user wrote.

Kazim said he did not express his or Der Spiegel’s views in the article but just quoted a miner.

“I reported from Soma and quoted one surviving worker with the words: ‘I would not have said this earlier, but now I want to tell Erdogan: Go to hell!'”, he said.

“AKP trolls did not see or did not want to see that this was a quote but considered me and Der Spiegel to have said that,” he added, referring to Erdogan’s Justice and Development Party (AKP).

{Maybe GM should jut put out a list of which cars and trucks it has sold in the last ten years are safe? Well, maybe not since it would probably be too short a list to bother with?}