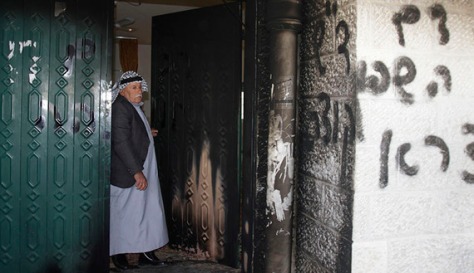 September 2012, Minister of Internal Security Yitzhak Aharonovitch announced the establishment of a new police unit to counter settler violence and called for a “zero-tolerance policy against terror, the desecration of Islamic religious institutions, attacks on symbols of governance and attacks commonly known as ‘price tag.’”

“We know who are committing these acts and plan to make more arrests shortly. We intend on putting these criminals behind bars,” Aharonovitch said while visiting the mosque in the Israeli Arab village Fureidis, the site of one recent such attack. “These are a bunch of criminals taking the law into their own hands. Most of them are in Judea and Samaria, are part of the extreme right and we know who most of them are.”

via US terror report details ‘price tag’ violence by Israeli settlers – Al-Monitor: the Pulse of the Middle East.