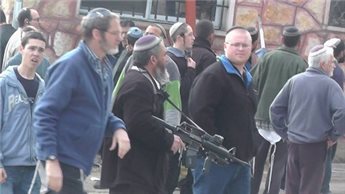 Six Palestinians, including a child, were injured in clashes that broke out after a group of Israeli settlers tried to raid Beit Ummar village near Hebron on Friday afternoon.

Spokesman for the local popular resistance committee Mohammad Awad Ayyad said that Israeli forces attacked a funeral procession in the village as dozens of settlers, some armed, gathered near the graveyard.

Settlers also attacked a restaurant in the area, smashed its windows and forced workers to close it down at gun point, Ayyad said.

He added that villagers arrived at the scene and scuffled with settlers, before Israeli forces intervened and fired tear gas and rubber-coated steel bullets at the Palestinian villagers.

Five people were injured by rubber-coated steel bullets fired by the Israeli forces, and a child was injured after the rear windshield of his mother\’s car was shattered by a stun grenade.

An Israeli army spokeswoman said that around \”200 Israeli civilians\” had gathered in Beit Ummar but that \”nothing out of the ordinary was happening,\” at that time, adding that later some Palestinians \”hurled rocks.\”