‘Any Republican who did their job is on that list,
labelled as traitors’.

‘The Tea Party Leadership Fund (who notably
bankrolled Louie Gohmert and Allen West according
to Opensecrets.org) has now decided to finance
*any* candidate who runs against any ‘traitor’ who
did their jobs’.

‘The Tea Party has decided that they hate the
United States enough that they just want to burn it
down, and they intend to play fiddle while it
burns’.
From :
http://www.addictinginfo.org/2013/10/29/tea-party-t
raitors/

Layla was the first women’s magazine to be published in Iraq. Launched in 1923, the magazine dealt with

Putting It Out There

There has been a lot of media attention, and some misleading attacks from critics, about some recent notices from insurance companies about changes in some people’s insurance plans.

More than three out of every four Americans gets insurance from their employer, Medicare, Medicaid and the Veterans Administration. These notices have been sent only to some of the 5% of Americans who get insurance on the individual insurance market.

Americans who are currently on the individual market stand to benefit the most from the Affordable Care Act. Even those receiving notices of “cancellation” will be able to enroll in a new plan that does not discriminate based on pre-existing conditions, does not deny them key benefits like maternity, mental health, or prescription drug coverage, and cannot drop you when you’re sick.

Americans in the individual market who have a plan that hasn’t been changed by their insurance company (an all-too-familiar occurrence for many) can keep their plan if they choose, even though a plan with better benefits is likely available.

via Fact-Check: Changes & Improvements in the Individual Market Under the Affordable Care Act | The White House.

A 15-year-old boy was hit by shotgun pellets while he and his friends were toiletpapering their principal’s home in Estill Springs, Tenn., Monday night. Dale Bryant Farris, 65, who lives two doors down from the principal’s home, fired at least two shots and struck the victim in the foot, knee, hand, thigh and torso. Farris is free on a $125,000 bond.

3-year-old Sheine Steine died of an accidental, self-inflicted gunshot wound to the head in Frederick, Colo., Monday morning. His mother reported that he had been injured in a fall. The toddler reportedly found a semiautomatic handgun in his parents’ bedroom. The shooting was ruled accidental and no one has been charged.

One wonders, however, if the millions of Americans who are so pleased to see food stamp benefits lowered—with more cuts likely to come— understand the impact this will have on a segment of society that one would be loathe to call ‘freeloaders’ seeking to live on the largesse of their country?

That would be the 900,000 veterans who offered up their lives for their country only to return home to find employment exceedingly difficult to come by—thereby creating the need for food stamps to provide for their families.

via Mistreating The Military-Nearly One Million Veterans To Suffer The Pain Of Food Stamp Cutbacks – Forbes.

Nothing is as simple as the press often depicts…

“Of 55 countries in Africa, Ghana is one of only 13 democracies,\” said George Ayittey, founder of the Free African Foundation. \”And if you apply a strict definition of democracy, Ghana might not make it at all.\”

He said: \”Free and fair elections are not enough to count as a democracy. In Ghana we need to reform the electoral system, our government is bloated – there are more than 80 ministers. Our wage bill for the civil service consumes 70% of government income. And the government is so hungry for money that it slaps tariffs on anything that moves.

\”Ghanaians are overtaxed, and the government is spending like a drunken sailor.\”

It\’s easy to see why Ghana attracts donors, investors and tourists alike – with its political stability and relatively accessible markets. As the regional director for DHL Express Charles Brewer said, he waited one hour to get through immigration at Ghana\’s airport upon arrival for the Economist gathering, which was unacceptable – but if it had been Nigeria, it would have been three hours.

But Ghana still has problems, serious ones, and nobody benefits from papering over the cracks.

via Ghana: west Africa’s haven of stability has its own challenges | World news | theguardian.com.

(The key phrase here is the one I bolded. Washington Post has exclusive based on interviews with people who will not allow themselves to be quoted in public. Skynet is not really falling as anyone might guess if they stop and think about how anyone might actually read all that stuff and who is interested in your e-mail or likes on Facebook. But it does sell advertising and folks can get all worked up for their own purposes.)

The National Security Agency has secretly broken into the main communications links that connect Yahoo and Google data centers around the world, according to documents obtained from former NSA contractor Edward Snowden and interviews with knowledgeable officials. 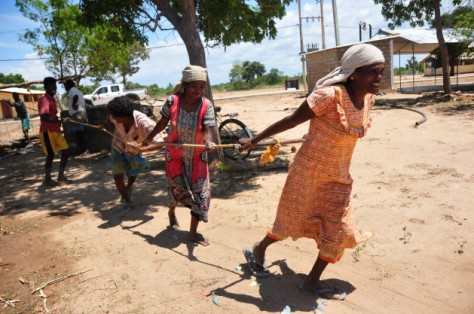 The battle might have been over four long years ago, but for the women in Sri Lanka’s former conflict zones in the northern and eastern provinces, the war continues.

This struggle is not only about making ends meet, but also about saving their honour. The island nation’s 26-year-long civil war (1983-2009) between the separatist Liberation Tigers of Tamil Eelam (LTTE) and the government forces left many women the sole breadwinners for their families with their menfolk either killed, maimed or gone missing.