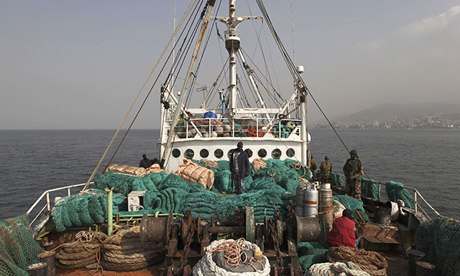 There is new evidence that large quantities of fish from west Africa are being \”stolen\” from communities heavily dependent on fishing, and loaded on to illegal vessels bound for South Korea.

The Environmental Justice Foundation (EJF), which uncovered the case, said it was part of the biggest trade in illegally caught fish in the world.

It detected the Korean-flagged vessel fishing close to Sierra Leone\’s Sherbro Island, where communities are heavily reliant on fishing for their food and income.

News of the vessel – believed to be transporting more than 4,000 boxes of illegally caught fish – comes amid growing concern about falling fish stocks in wst Africa, as more traditional fishing communities are pushed into poverty.

“Failure to lift the debt ceiling would be a major event,” Olivier Blanchard, the IMF’s chief economist, said at a news conference.

U.S. Treasury officials say the government would quickly run out of cash and could default on its obligations if Congress doesn’t approve an increase in the borrowing limit by Oct. 17. U.S. Treasury bonds are a key part of the international financial system and a default would have global repercussions. For that reason, many analysts expect the borrowing limit will probably be increased on time.

Republicans have now lost three successive elections to control the Senate, and they\’ve lost the last two presidential elections. Nonetheless, they fought tooth and nail to kill President Obama\’s health care initiative. They lost that fight, but with the corporate wing of Democrats, they managed to bend it toward private interests.

So, we should be here on this: Obamacare, as it is known, is deeply flawed. Big subsidies to the health insurance industry, a bonanza for lobbyists, no public option and, as the New York Times reported this week, \”Millions of Poor Are Left Uncovered by Health Law\” — largely because states controlled by Republicans refused to expand Medicaid.

Despite what they say, Obamacare is only one of their targets. Before they will allow the government to reopen, they demand employers be enabled to deny birth control coverage to female employees; they demand Obama cave on the Keystone pipeline; they demand the watchdogs over corporate pollution be muzzled and the big bad regulators of Wall Street sent home. Their ransom list goes on and on. The debt ceiling is next. They would have the government default on its obligations and responsibilities.

When the president refused to buckle to this extortion, they threw their tantrum. Like the die-hards of the racist South a century and a half ago, who would destroy the union before giving up their slaves, so would these people burn down the place, sink the ship.

via Let’s Call The Shutdown What It Is: Secession By Another Means.

In case it seems like this is not a big deal (just 300 illnesses, just some raw chicken): foodborne illness can have lifelong consequences that range from arthritis to kidney trouble to heart disease. And: The number of illnesses that can be identified in any foodborne outbreak are almost always an under-estimate.

In its statement, FSIS said:

Raw products from the facilities in question bear one of the establishment numbers inside a USDA mark of inspection or elsewhere on the package:

The products were mainly distributed to retail outlets in California, Oregon and Washington State.

It is the second time this year that the firm at the center of this alert, Foster Farms, has been linked to a nationwide Salmonella outbreak. In July, according to the CDC, 134 people in 13 states were made ill by chicken linked to two Foster Farms slaughterhouses.

via There’s a Major Foodborne Illness Outbreak and the Government’s Shut Down – Wired Science.

Occupiers feel they can do whatever they want to holy sites of others? – Dozens of Israeli troops and intelligence agents entered the al-Aqsa mosque compound on Tuesday through the Moroccan Gate, locals said.

Witnesses told Ma\’an that over 80 female Israeli soldiers entered the compound and listened to a short lecture before touring the compound in seven groups.

Some countries have made impressive progress over recent decades in equipping more people with better literacy and numeracy skills. Young Koreans, for example, are outperformed only by their Japanese peers, while Korea’s 55 to 64 year-olds are among the three lowest-performing groups of this age. Older Finns perform around the average, while younger Finns are among the top performers, together with Japan, Korea and the Netherlands.

But in England and the United States, the literacy and numeracy skills of young people entering the labour market are no better than those leaving for retirement. England ranks among the top three countries surveyed for literacy skills among the 55-65 year-olds. But the country is in the bottom three when it comes to such skills among 16-25 year-olds. American 55-65 year-olds perform around the average, but young Americans rank the lowest among their peers in the 24 countries surveyed.