Racism seems to exist all over the world, as does feeling inferior and afraid which often leads one to try and find something that makes you feel equal or superior – even if only superficially…

France24 lead an investigation in Lebanon to try and find out whether domestic workers suffer abuse in Lebanon. I’m sure you already know the answer. Politicians, lawyers and academics gathered Monday in St. Vincent & the Grenadines to advance an effort by more than a dozen regional nations to seek slavery reparations from three European countries that benefited from the Atlantic slave trade, the Associated Press reports.

The three-day conference is the first major step forward since the Caribbean Community announced in July that it intended to demand compensation for slavery and the genocide of native peoples from the governments of Britain, France and the Netherlands. Representatives from all the member nations and territories of Caricom, as the group is known, are attending the gathering.

St. Vincent Prime Minister Ralph Gonsalves, who is leading the effort trying to force the region’s former colonial powers to pay reparations, said the matter is a “fundamental, defining matter of our age.”

“The European nations which engaged in conquest, settlement, genocide and slavery in our Caribbean must provide…

This past weekend was about as perfect as weekends get when you are a feminist-minded fitness junkie like myself.  On Saturday, I ran my favorite 10K loop around a nearby lake, then went to a pole tricks class, which I enjoy not only for the way the class challenges me but also because of the fun, positive environment at the studio (which I will have to write about one day).  On Sunday, I finally hit my first 50-mile bike ride, the last 10 miles of which I did on my tri bike on the indoor trainer while watching episodes of “Roseanne” on TV Land.  It was a good weekend.

These were all wonderful, wonderful things, but the pinnacle of my weekend came Saturday afternoon, when Brian and I went to the AVP St. Pete Open, which was being held in Vinoy Park in downtown St. Petersburg.  The pro beach… 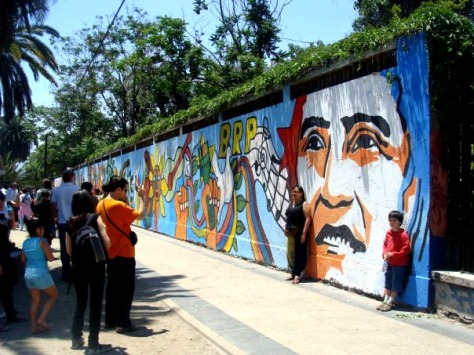 On the night of September 15, 1973, Victor Jara was picked out of a line of prisoners being led out from the Chile Stadium to the National Stadium, another detention centre, in the days following Pinochet’s coup. It was the last time he was seen alive by anyone except the military. On the morning of September 16, his bullet-ridden body appeared alongside those of six other victims just outside Santiago’s Cementerio General.

It took three decades for the Chilean justice system to identify the eight soldiers involved, and it is now requesting the extradition of one of them from the government of the United States.

It was weapons in the hands of members of Chile’s military that discharged the 44 bullets that killed Victor Jara. But the folk-singer became a legend in his homeland; and today, 40 years after the massacre, he is a major icon for musicians and their fans around the world.

Just last week, in his first concert in Chile, rocker Bruce Springsteen interrupted his usual repertoire to sing “Manifiesto”, one of Jara’s most emblematic songs. It was a tribute from one creative force to another, sealing once and for all the universal importance of the Chilean artist’s work. “If you are an activist and a musician, Victor Jara continues to be a great inspiration”, said Springsteen.

via Victor Jara: Music In Search of Justice 40 Years After His Murder · Global Voices.

According to Slate’s gun-death tracker, an estimated 8,241 people have died as a result of gun violence in America since the Newtown massacre on December 14, 2012.

25-year-old Debra Martin and her 3-year-old son were accidentally shot and wounded in Chilton County, Ala., Saturday night. Charles Martin, 27, the child’s father, told a police dispatcher he had just finished cleaning his handgun and was in the process of reloading it when it went off. No arrests will be made.

A 5-year-old child was shot twice when an argument between his parents escalated to gunfire in New Orleans East, La., Sunday night. Phong Nguyen, 34, told police he became so upset with his wife that he grabbed a Glock 27 semi-automatic pistol and began to fire aimlessly, hitting his son in the leg and torso. He faces charges of attempted first-degree murder, second-degree cruelty to juveniles and aggravated assault.

Lance Wilson, 3, was shot in the head and killed at a mobile home park in Michigan City, Ind., Sunday afternoon. 24-year-old Zachariah L. Grisham, who is romantically involved with the victim’s mother, was charged with reckless homicide. Investigators found that Grisham and the victim had been playing a game, with the boy using his hand to pretend to shoot Grisham. During the game, Grisham took out a handgun and, thinking it was not loaded, pulled the trigger.

These new data come as the House prepares to consider legislation later this week that would cut SNAP by $39 billion over the next decade.  The bill would deny food assistance to millions of low-income people and reduce assistance for many others.  The cuts would deny or reduce basic food assistance to low-income working families, seniors, jobless adults, children, and even veterans.

Some point to SNAP’s recent growth as a justification for the House cuts.  But, as we recently explained, SNAP caseloads and spending are expected to fall in coming years as the economy and labor market improve. The Congressional Budget Office projects that SNAP spending will fall to 1995 levels as a share of gross domestic product (GDP) by 2019 (see chart).

via Off the Charts Blog | Center on Budget and Policy Priorities | Census: SNAP Lifted 4 Million People Out of Poverty in 2012 and Reduced Hardship for Millions More.