Remote-controlled 3 channel helicoptersHazard:The rechargeable battery inside the helicopters can overheat, posing fire and burn hazards to consumers or nearby item

via CPSC – Toys R Us Recalls Remote-Controlled Helicopters Due to Fire and Burn Hazards.

A strain of bird flu that has sickened 132 people and killed 37 in China this year may have more potential to spread worldwide than the dreaded H5N1 avian influenza does.

The new flu, known as H7N9 avian influenza, latches onto sugars that coat bird cells — and it can cling to sugars on human cells too, Yuelong Shu of the China Center for Disease Control and Prevention and colleagues report July 3 in Nature. That may give the virus the ability to jump from birds to people relatively easily, the team reports.

By contrast, outside of two highly publicized laboratory experiments (SN: 6/2/12, p. 20), the H5N1 virus only grasps onto bird sugars and hasn’t developed the ability to be readily transmitted among people. H5N1 has infected 630 people worldwide, killing 375.

H7N9 grows especially well in lung cells, the team discovered. That finding helps explain why people infected with H7N9 often develop severe pneumonia. But the virus doesn’t cling as well in the trachea, which could limit H7N9’s ability to spread among people via coughs or sneezes.

The researchers also examined blood samples from 90 healthy people who had gotten flu shots in 2012 and 2013. None of them carried antibodies that can fight H7N9, indicating that most people are probably susceptible to the virus.

Hope for best! Pray for best!

Protesters across Egypt have erupted into celebration following news that Egypt’s Armed Forces has removed President Morsi from power. The move came following the expiration of an ultimatum that was issued by the Military 48-hours ago, demanding the President respond to the Egyptian people’s aspirations.

In a televised address, the Military ushered in a new era in Egypt’s future and declared the removal of President Morsi from office. Head of the Supreme Constitutional Court, Adly Mansour, will rule Egypt during the transitional period.

Armed Forces Chief outlined the roadmap for the coming months, which will include:

2. Holding early Presidential elections, until which the head of the Supreme Constitutional Court will be in charge.

3. Creating a national coalition government that represents the aspirations of all Egyptians

At the start of the statement, Armed Forces…

21:55 P.M. The Egyptian army has told Mohammed Morsi that he was no longer the head of state, Egypt’s state-run Al-Ahram newspaper reports, quoting a presidential source.

The tomato plants are so thick and sturdy, nothing can bring them down.  That’s their story and they’re sticking to it.  Never trust a tomato.  Their goal is to reproduce by getting rotten tomatoes on the ground.  They will fight the trellis, the cage, gravity.  They will win.

Don’t engineers grow tomatoes?  In the hundreds of years tomatoes have been cultivated, the standard support is still an upside-down wire cone?!

Congress could still cut funding for horse slaughterhouse inspections, effectively reinstating the ban. Both the House and Senate agriculture committees have endorsed such proposals, and the Obama administration’s proposed budget for the next fiscal year also eliminates that funding. Another bill would ban U.S. horse slaughter facilities while prohibiting exports.

While most Americans would blanche at the prospects of eating horse burgers or steaks, the processors plan to serve overseas markets.

The 36-page petition to the U.S. District Court in San Francisco alleges the USDA did not prepare required environmental reviews for Valley Meat Co.’s horse meat plant in southeastern New Mexico or for any of the pending requests. It lawsuit cites negative environmental consequences caused by horse slaughter, including air and water pollution.

The lawsuit alleges that the animals can be fed drugs and medication not fit for human consumption because horses in the U.S. “are not raised in regulated industries conscious of public health and safety concerns, but rather in private homes, on racetracks and as working animals.”

The three other groups challenging USDA and its Food Safety Inspection Service are each from California: the Marin Humane Society in Novato; Horses for Life Foundation; and Return to Freedom of Lompoc. The Humane Society and Front Range Equine Rescue had previously announced their intentions to challenge the USDA in court.

I supposed that very few casual readers of the New York Herald of August 18th observed, in an obscure corner, among the “Deaths,” the announcement,—

I happened to observe it, because I was stranded at the old Mission-House in Mackinaw, waiting for a Lake Superior steamer which did not choose to come, and I was devouring to the very stubble all the current literature I could get hold of, even down to the deaths and marriages in the Herald. My memory for names and people is good, and the reader will see, as he goes on, that I had reason enough to remember Philip Nolan. There are hundreds of readers who would have paused at that announcement, if the officer of the Levant who reported it had chosen to make it thus:—”Died, May 11th, THE MAN WITHOUT A COUNTRY.” For it was as “The Man without a Country” that poor Philip Nolan had generally been known by the officers who had him in charge during some fifty years, as, indeed, by all the men who sailed [pg 009] under them. I dare say there is many a man who has taken wine with him once a fortnight, in a three years’ cruise, who never knew that his name was “Nolan,” or whether the poor wretch had any name at all.

via The Project Gutenberg EBook of The Man Without a Country and Other Tales by Edward E. Hale.

Duh? She hits it!

(Photo via of June 30 demonstration in Cairo via Twitter)

Millions and millions poured into the streets of Cairo and other regions of Egypt, calling for President Morsi to resign. The vast, unprecedented numbers of the June 30 demonstrations, which continued well into July 1st with unflagging fervor and tenacity, has defied expectations. The sheer magnitude of these crowds has even defied logic – after all, Morsi was democratically elected. Yet, this is not a revolution to establish democracy; it is revolution to defend an identity. Although there are several political, social, and economic factors behind June 30, the tipping point was what many in Egypt perceive as a new form of colonization by the Muslim Brotherhood; the revisionist party that considers itself the savior of Islam has embarked on a mission to change the identity of Egypt into an Islamist one.

For over 7,000 years, Egyptians have accumulated… 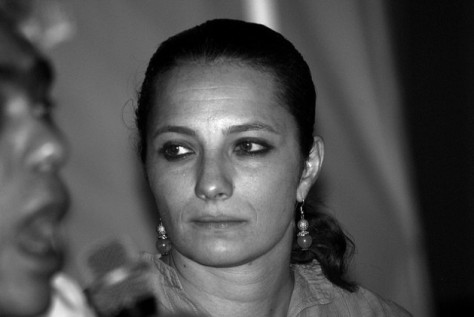 A prominent human rights organisation based here announced Tuesday that its annual award for 2013 would go to Ragia Omran, an Egyptian lawyer and women’s rights activist.

“With dedication and courage, Ms. Omran is often the first to arrive on the scene at jails, police stations, court houses, and military and civilian prosecution offices,” said Kerry Kennedy, president of the Robert F. Kennedy Center for Justice and Human Rights, which has presented the award to outstanding defenders and advocates of human rights for 30 years.

“She is doing critical work in a country and a region that is going through a very difficult and important time.” — RFK’s Santiago Canton

“Hundreds of peaceful activists have her to thank for successfully securing their release and protecting their rights to freedom of speech and association. [Omran] is a beacon of hope for the women of Egypt and a champion in the global human rights movement.”

Perfection in retro and today… smile