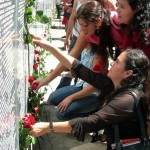 Niños de la Memoria tells the story of the search for hundreds of children who disappeared during the Salvadoran Civil War. Many were survivors of massacres carried out by the U.S.-trained Salvadoran army. Taken away from the massacre sites by soldiers, some grew up in orphanages or were adopted abroad, losing their history and identity.  Niños de la Memoria weaves together three separate yet intertwined journeys in the search for family, identity and justice in El Salvador, and asks the larger question: How can a post-war society right the wrongs of the past?

via Niños de la Memoria | Children of Memory | A documentary film project about children who disappeared during the war in El Salvador.

In the wake of last week’s historic Supreme Court ruling on the Defense of Marriage Act (DOMA), many members of the far-right have come forth with statements condemning the Court’s decision.

Opposition from these officials should not be surprising given their propensity to espouse bigotry and demagogue others including immigrants and Muslims. Bachmann and Gohmert are stalwart members of the Immigration Reform Caucus and Metcalfe is the founder of State Legislators for Legal Immigration – the two most prominent coalitions of anti-immigrant lawmakers in the country. These legislators and their colleagues also regularly sound the alarm on Islamic Sharia law hurting America in order to demonize American Muslims. Yet, when the country’s highest court rules against their ostensibly Judeo-Christian “God’s Law” they are outraged.

The Supreme Court ‘s decision reiterated that all Americans are entitled to equal rights under the Constitution.  Nativists should not be allowed to decide that the Constitution is only applicable when it furthers their bigoted agenda.

“I have met with supporters, we had a great conversation,” she said at a press conference in Frankfort, Ky. “We can next make the best move, the best difference by running for the U.S. Senate.”

Grimes is the first Democrat to mount a challenge against McConnell.

A Washington state company is recalling its chai tea because the beverage was improperly processed and therefore has the potential to be contaminated with Clostridium botulinum bacteria.

Harmony Chai of Eastsound, WA issued a voluntary recall of its concentrated black spiced and decaffeinated roobius chai teas Friday after testing by the Washington State Department of Agriculture revealed the product had not been processed in a way that prevents Clostridium botulinum contamination.

Power To The Voters

Voting when the Constitution was ratified was basically restricted to white males. Freeing the slaves and enfranchising them, allowing women to vote and lowering the voting age to 21 each took individual Constitutional Amendments to bring to fruition. Until recently, though hard-fought and excruciatingly slow, the direction of change has been in favor of including larger segments of the population in our elections, not smaller ones. Without swift Congressional action, this decision by the Supreme Court could result in a drastic exclusion of increasing numbers of people from the electorate unjustly.

via The Right to Vote.

GMO Crops and Round Up killing Butterfly’s ecology

What we’re seeing here in the United States is a very precipitous decline of monarchs that’s coincident with the adoption of Roundup-ready corn and soybeans. The first ones were introduced in 1997, soybeans first, then corn. By 2003, 2004, the adoption rate was approaching 50 percent,

and then we really began to see a decline in monarchs. And the reason is that the most productive habitat for monarch butterflies in the Midwest, in the Corn Belt, was the corn and soybean fields [where milkweed, which monarchs feed on, grew]. Before Roundup-ready crops, weed control was accomplished by running a tiller through those fields and chopping up the weeds and turning over the soil, but not affecting the crops. The milkweed survives that sort of tillage to some extent. So there were maybe 20, 30, 40 plants per acre out there, enough so that you could see them, you could photograph them.

via iggy mogo — Tracking the Causes of Sharp Decline of the….

This is how the President is going to protect wild animals?

In approving Valley Meat Co.’s plans to produce horse meat, Department of Agriculture officials also indicated they would grant similar permits to companies in Iowa and Missouri as early as next week.

With the action, the Roswell, N.M., company becomes the first operation in the nation licensed to process horses into meat since Congress effectively banned the practice seven years ago.

But the company’s attorney said on Friday that he remained skeptical about Valley Meat Co.’s chances of opening any time soon, as the USDA must send an inspector to oversee operations and two animal rights groups have threated lawsuits to block the opening.

“This is very far from over,” attorney Blair Dunn said. “The company is going to plan to begin operating in July. But with the potential lawsuits and the USDA — they have been dragging their feet for a year — so to now believe they are going to start supplying inspectors, we’re not going to hold our breath.”

The company has been fighting for the permit for than a year, sparking an emotional debate over whether horses are livestock or domestic companions.

The decision comes more than six months after Valley Meat Co. sued the USDA, accusing it of intentionally delaying the process because the Obama administration opposes horse slaughter.

The Justice Department moved Friday to dismiss the case. Dunn said he would fight to keep it open until all issues, including attorneys’ fees, are resolved.

“This item would modify (the budget’s funding) methodology and increase payments to nursing facilities, while no new data has been presented to justify those changes,” the governor said in a statement.

But approving anti-abortion actions to the budget was “OK?”

A picture taken on September 4, 2012 shows a Trappist monk walking in front of graffiti reading in Hebrew: “Jesus is a monkey” (L) and “mutual guarantee, Ramat Migron and Maoz Ester” (West Bank settlements), which was sprayed on the wall of the Christian Catholic Latrun monastery between Jerusalem and Tel Aviv, after unknown people set the monastery’s door ablaze and vandalized its wall. AFP PHOTO/MENAHEM KAHANA

JERUSALEM: Israel announced a crackdown on Monday against Jewish ultranationalists who vandalise Palestinian property, saying they were tantamount to terrorists and their attacks could fan sectarian violence.

The move followed the arrest of a 22-year Israeli from an Orthodox Jewish town near Tel Aviv for the vandalism of a Christian monastery in the occupied West Bank last year. The attack was carried out in solidarity with hardline Jewish settlers.