In April 2013, ten cases of dengue fever in travellers returning from Luanda, Angola, to five countries on four continents, were reported to the globally distributed GeoSentinel Surveillance network. Dengue virus serotype 1 was identified in two cases. The findings indicate that a major dengue outbreak is currently ongoing in Luanda. This report illustrates how cases from an emerging arboviral epidemic focus can spread internationally and highlights the risk of dissemination of a vector-borne disease into receptive areas.

If anyone still needs an example of how easy it is now for a pandemic or serious disease outbreak of something like Ebola to travel quickly – here it is.

“He actually said this with a straight face and pretended that he cared if immigration reform passed or not.”

Areva, the world’s second largest uranium producer, said that its mine was “badly damaged” forcing it to stop production.

Although Areva has been attacked by AQIM in the past – with five French workers taken hostage at the site in 2010 – the latest attacks are the first of their kind in Niger. Niger has been singled out as a target for its role in the military intervention in Mali, for its relationship with France – which obtains 20% of its uranium from Niger – and with the US, which

signed an agreement this year to establish a new military base in the country.

This week Nigeria, which borders Niger to the south, asked Niger for help fighting its militant Islamist group Boko Haram, members of whom are reported to be operating in southern Niger. Last month Niger’s military participated in a raid against Boko Haram fighters in the Nigerian town of Baga, near the border with Chad.

“These attacks are an inevitable consequence of the decisions our government has taken,” said Akfar. “But our intervention in Mali was not a mistake – we share borders with Mali, and if we had not intervened, the crisis there would have affected us anyway.

“We are a poor country, but now we are going to have to find the means of heightening our security, or else face further attacks.” 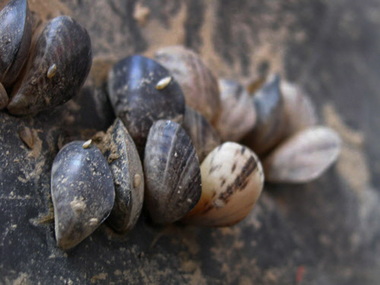 An eastern Oregon checkpoint aimed at keeping invasive species from hitchhiking into Oregon on boats has opened for the spring, and it found an infested boat the next day.

The Oregon Department of Fish and Wildlife says about 50 small quagga mussels were on the outboard motor of a boat being returned last week from Lake Mead.

The Ontario Argus Observer reports  the boat was decontaminated with a high-pressure, hot water cleaning.

Quagga mussels are a prime target of the inspections. Brought to the United States on cargo ships, they have spread widely, but not yet to the Northwest. They damage infrastructure and outcompete native species.

You know that old truism that I just made up: At any given moment, somewhere  in the United States, your reproductive rights are being debated by old white men. And right now, it’s in the House of Representatives, where Rep. Franks and these guys are having hearing to discuss his proposed 20-week abortion ban.

via Where are a bunch of dudes debating your reproductive rights today?.

The level of immunity to the recently circulating H7N9 influenza virus in an urban and a rural population in Vietnam is very low, according to the first population-level study to examine human immunity to the virus, which was previously only found in birds. The findings have implications for planning the public health response to this pandemic threat.

The study used a new, high-throughput method that allows blood samples to be analysed for antibodies to multiple human and animal influenza viruses at the same time and is easier to standardise than previous techniques. However, the assay is yet to be validated clinically for the H7N9 virus, and the researchers caution that the results must be interpreted with care.

Since the first case of H7N9 infection in humans was reported in February 2013, there have been 131 confirmed cases and 36 deaths, all in China apart from one case in Taiwan. All of the infections seem to have come from infected poultry and there is no evidence of sustained transmission between people.

The solution for Tripoli isn’t political. If it were, all those politicians asking for calm and peace would have succeeded by now. The problem is that those same politicians want to perpetuate the status quo, because this status quo works and does wonders for them and their careers.

Perhaps the solution for Tripoli is for a side of the battle to actually win. Perhaps the problem in this country is that we have never had a clear winner and a clear loser in anything, not elections, not the war and not even those sporadic battles in Tripoli which we’ve gotten used to.

Until then, my thoughts go to all the people spending their days and nights in absolute terror in the city I’ve come to love, a place that doesn’t deserve the hand it’s dealt.

via Why The Lebanese Government Is Silent On Tripoli | A Separate State of Mind | A Lebanese Blog.

Every once in a while, the city I once referred to as “3enna” by mistake becomes a place I force myself to go the extra mile to recognize.
The last time such heavy fights broke out in the city, we were all in outrage at how media couldn’t care less about the people dying and the innocent lives in danger. Today, the outrage over Tripoli’s worst night since the Civil War is gravitating towards a government that is as apathetic as apathy goes.

However, are we supposed to expect anything more from our government? Tripoli’s Ministers and MPs go on air to voice their disdain and condemnation over what’s going on. What’s actually happening, though, is that in the other side of the room is one of their henchmen waiting on a phone to issue further instructions to the fighters on both sides of the battles.

The worshippers were hoping to obtain holy “new anointing water”, which Emmanuel TV had announced would be distributed for free. “The anointing water usually costs 80 cedis, but we learned that on Sunday it would be given out for free,” said Joseph Adanvor, 52, who witnessed the fatal stampede. “I have never seen anything like it before. People had come from Togo, Benin, even from Kenya. They tried to close the church but people were climbing over the walls and breaking in. The police and army were there but they couldn’t control the crowds.”

via Celebrity pastor under fire after worshippers die in rush for ‘holy water’ | World news | guardian.co.uk.

Locust swarmed many regions of Madagascar and even a few of its cities. This disaster comes as a result of the humid conditions[fr] that remained after cyclone Haruna’s landing. The FAO states that 60% of rice production will be affected by the invasion.