Through the Eye of the Needle 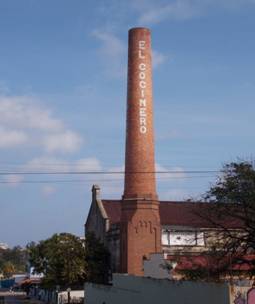 That big red brick chimney always caught my eye. As a girl it seemed immense to me. I imagined goblins living there. It aroused great fascination, especially since it was on a route we had to take — leading to the “scary” iron bridge over the Almendares River, which occasionally would open up like a giant wolf’s jaws to allow yachts to pass through — when we went to visit Aunt Cuca in Miramar. It was always one of my favorite walking paths.

With the passage of time and the sudden takeover the country by incarnate deities, these fantasies and dreams of childhood were abruptly ripped out by their roots in order to make way for a “new reality.” The dream-like tower remained, but it no longer sent out smoke signals. Little by little it came to seem more lifeless. My make-believe creatures disappeared along with the gray puffs that no longer billowed from its…

Among the considerations when starting a garden of your own is what kinds of plants and seeds to purchase. If you’re a beginning gardener, you might be surprised to hear that there can be several different choices when deciding what kind of seed or plant to purchase for each type of produce you buy.

The three main choices are these: heirloom, hybrid, and genetically modified. Each comes with a unique set of benefits and concerns that you’ll want to consider before making a final decision. Let’s review what each term means.

Heirloom seeds and plants are open-pollinated by insects, birds, and the wind. Plants grown from heirloom seeds can be allowed to flower and go to seed. Once that happens, you can collect the seeds and use them to re-plant the following year. They have also often become adapted to local climates, meaning they are likely to be more resistant…

Because not remembering the woes and wounds of this nation is part of why we are where are today, I present to you a guest post by my good friend Hala Hassan.

It was April of 1996. I was a 6 year old girl, growing increasingly scared of a month where I’d wake up to rockets getting fired every single day from the neighboring tanks over the hill and warplanes constantly raping the sky above my house.

Operation Grapes of Wrath was getting scarier, deadlier, more ominous by the minute. Just another regular day of a Southerner back then.

Random memory #1: Zaven, who currently runs a TV show on Future TV, was a news anchor then who, along with his co-anchor short haired Zahira Harb (I don’t know where she is now or what she does), were distinctive figures in my 6 year old memory.

Can’t keep peace or fix the roads but can mess with only device keeping people informed and making the market work. Loser of an idea!

The day we have all been dreading is upon us.

Are you one of those people who ridiculed that $1500 price tag for the iPhone 5 when it was released as you should, bought one on your own from abroad and had a friend bring it over with them and bypass our ridiculous custom fees? Well, you lucked out.

As of June 1st, 2013 that option may not be available to you anymore as part of a new decree to fight phone counterfeits on the Lebanese market which do not possess a true IMEI number (link). Your phone number will have to be registered to your phone’s IMEI number in order for you to get service.

So unless you’re a tourist coming into the country and roaming, you’ll have to pay custom fees on your phone in order to have its IMEI registered and use it on Lebanon’s dismal…

To come up with so many fanciful thoughts – he must have a team of writers as other comedians do – you think?

In a contrast to the formal statement made by the Muslim Brotherhood condemning the Boston bombing, Essam el-Erian, the vice chairman of the Muslim Brotherhood’s Freedom and Justice party, sparked widespread controversy when he posted a long comment on Facebook, later translated into English, in which he connected the twin blasts in Boston to an alleged anti-Muslim conspiracy that spans the globe. He also linked the bombings to the French military action in Mali, the conflict in Syria, and what he described as the “faltering” peace process between Turkey and the rebels in the Kurdish Workers Party (PKK).  He then asked, “Who planted Islamophobia through research, the press, and the media? …Who funded the violence?” The Arab and Muslim worlds have a long history of indulging in conspiracy theories theories, most of which revolve around the West, Israel, and Zionism plotting against the Arabs. Islamist movements including the…

Spot on, as they say!

During that time he created the NHS, welfare services for deprived children, support and financial help for the elderly and the disabled, he introduced the right to a free secondary education, sickness and child benefit, he raised pensions to a liveable level, built large numbers of affordable housing for low-income families and built numerous new towns for working people.

Clement Attlee also oversaw improvements in survival rates for infants and increased life expectancy for the elderly, introduced equality in law for married women, eradicated the abject destitution which existed in the 1930s across large parts of the country and reduced the acute social deprivation which previously existed in the poorest rural and urban areas.