Strains of potentially deadly, antibiotic-resistant Staphylococcus aureus bacteria show seasonal infection preferences, putting children at greater risk in summer and seniors at greater risk in winter, according to results of a new nationwide study led by a Johns Hopkins researcher.

It’s unclear why these seasonal and age preferences for infection with methicillin-resistant Staph aureus (MRSA) occur, says Eili Klein, Ph.D., lead author on the study and a researcher at the Johns Hopkins Center for Advanced Modeling in the Social, Behavioral and Health Sciences.

But he says that increased use of antibiotics in the winter may be one of the reasons. The winter strain that infects seniors at a greater rate is generally acquired in the hospital and resistant to more antibiotics. On the other hand, the summer strain of MRSA, which is seen with growing frequency in children, is largely a community-transmitted strain that is resistant to fewer antibiotics.

Last May, before the inauguration of Vladimir Putin for yet another term as Russia’s president, tens of thousands of people demonstrated in Moscow in protest against the fraudulent election that gave Putin another victory two months before. Police descended on the peaceful demonstration and attacked protests, arresting 400 people.

Since then, Putin’s dictatorial regime has used the May 6 demonstration as a bogeyman to accuse various left-wing leaders of wanting to foment violence — when those truly bent on violence were his own security forces. In this statement, left-wing organizations in Russia — the Russian Socialist Movement, the Left Front and the Russian Anarchists — appeal for international solidarity against the government’s violence and repression. 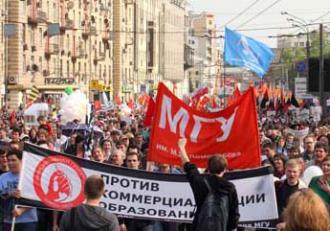 Demonstrators in the streets of Moscow on May 6 (Sergey Kukota)

TWO MONTHS ago, we, representatives of the Russian left, asked for your…